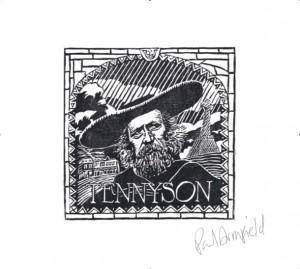 For this, his fourth CD, Paul Armfield has chosen to set a selection of Tennyson’s poetry to music. He is joined on the album by Mari Persen (fiddle and vocals), Donal O’Riain (fiddle) and Doug Lang (bodhran.) Otherwise, he does everything himself - playing, recording and producing.

The CD opens with Little Birdie, which has a jolly toe-tapping tune, accompanied by guitar, fiddle and whistling. The only other up-beat track is The Poet, which has a more complex arrangement than the other pieces. Many will recognise The Charge of the Light Brigade, on which the voice of Tennyson himself appears, thanks to a wax cylinder recording.

In some cases, this is not the first time the poems have been set to music: Maud is well known as a music hall song of course and is given a rather more tasteful treatment here, while Sweet and Low has been arranged for male choir.

The shortest track, The Sailor Boy, is the most striking being entirely unaccompanied. By way of a contrast, the following track The Voyage is over 10 minutes long.

While an interesting idea, the settings are all quite similar and the listener is left wishing a few more risks had been taken.