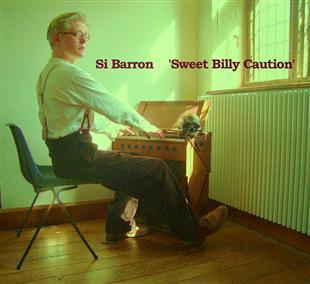 Singer and multi-instrumentalist Si Barron is half of the duo Barron Brady. However, Sweet Billy Caution is a solo album in the truest sense of the term as there are no other players on the album. Si plays dulcimer, harmonium, pump organ, whistle and drums. The result is a pared-down intimate and sometimes quirky sound that is nevertheless full and interesting.

Si gives us his own interpretations of many popular songs here. Songs that are more often heard as raucous free for alls in folk club singarounds become gentle and even poignant in Si’s hands - Richard Thompson’s Down Where the Drunkards Roll and the shanty Leave Her Johnny are prime examples of this. It’s unlikely that Thompson’s classic has ever been accompanied by a harmonium and dulcimer before!

The use of the harmonium and pump organ lends a quirkiness to the rather saucy music hall song Spotty Dick especially.

Si’s delicate guitar playing shines out in his gentle arrangements. His singing style is similar to that of Ashley Hutchings at times, with semi-spoken lines. This is particularly evident in Seventeen Come Sunday. There is also some lovely guitar work in Franklin and Ewan MacColl’s Prison Song.

A beautifully intimate album which is a delight to the ear.