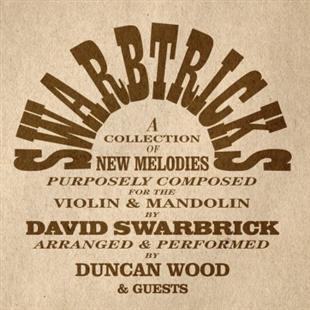 Few albums can boast such prestigious origins as this one, which is comprised entirely of music penned by fiddle-playing legend, Dave Swarbrick. In a highly original concept, a selection of tunes composed by ’Swarb’ especially for this album are gifted to Duncan Wood to interpret, perform and exercise his creativity upon. The result of this unusual collaboration is a tune-collector’s dream.

Duncan Wood himself plays the fiddle and mandolin, and he’s joined by guests Cathal McConnell on flute and whistle and Martin McDonald on guitar. The album features 37 original compositions artfully arranged across 17 tracks and its influences come from right across the British Isles. With Wood and McDonald hailing from Scotland, McConnell from Northern Ireland and Swarbrick himself from England, the men behind the music come from right across the UK as well.

Entering with a strong tune and driving percussion, the first track, The Roaring Broadside, grabs your attention right from the word go. Like many of the tunes on the album, it would be right at home as a morris dance accompaniment.

The Empty House/The Bonny Red Bonnet/Cofa is another bold and well-paced piece, and there’s something ancient and irresistible about the hypnotic rhythms and enchanting minor harmonies on display.

Speaking of ancient, there’s also a touch of the Renaissance about The Broom in Bloom/The Cow on the Heath. Indeed, there’s an aspect of the Tudor court mixed up in this track, with its pizzicato melodies being somewhat reminiscent of Greensleeves.

Another stand-out track from the collection is Still Waters. Slow and heartfelt, this solo guitar piece flows forth like a wordless song. Finally, the whole album is rounded off neatly with Close of Day/Mabel Gwendoline, which features a feast of string instruments and lovely tunes, and slows everything down to a pleasing end.

Overall, this is a classic instrumental album which will inspire many to pick up their fiddle again. There is just one thing lacking which could make it even better- a tune book to accompany it so we could all play along!

1. The Roaring Broadside
2. The Sunny Day Hornpipe / Eye of the Needle
3. Passchendaele / The Crow Steps Reel
4. Down in One / Forty Winks / The Merry Devil / Ruby
5. Still Waters
6. The Happy Welcome / The Cat among the Chickens
7. The Engineer / Through the Woods / The Little Red Fox
8. Sweet Flowers of the Field
9. The Broom in Bloom / The Cow on the Heath
10. The Empty House / The Bonny Red Bonnet / Cofa
11. Farewell to Edinburgh
12. Dip o’ the Wizzer / The Powder Monkeys
13. The Ghosts of Aden / The Falcon
14. The Polar Star / Kemble’s Cascade
15. The Clearances / The New World March / The New World Jig
16. Foxed and Faded / Bargains a Plenty / The Secret Store / The Dealer
17. Close of Day / Mable Gwendoline