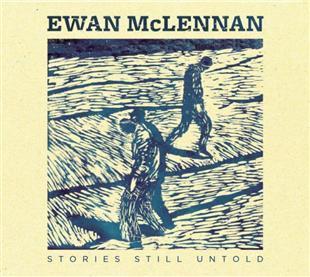 Having grown up in Edinburgh, the album continues to be influenced by his Scottish roots, but Ewan does not shy away from arranging and performing Irish, English and even American songs which undoubtedly help inspire his self-penned material.

Ewan delivers both traditional and original songs with real passion and honesty. As a result the listener can expect to be thoroughly engaged. Each track makes for a compelling listen and the thought given to the range of subject matters covered gives the whole album admirable depth, confirming Ewan’s desire to ’draw a line from the present to the past and then back again’.

Ewan sings tales of love, growing up, murder, rebellion and politics, amongst many others. Even within this variety, Ewan excels in treating the songs individually and manages to capture the spirit of each, highlighting his superb storytelling techniques.

The album begins with A Beggar, a traditional Scottish song which tells the tale of a woman running off with a beggar. As can be said for the whole album, Ewan sets flawless vocals over intricate, delicate guitar arrangements which come to the forefront of the sound at regular intervals during the song. The addition of the whistle on this particular track brings energy and personality to the story without taking away from the main elements of the song.

There then follows a seamless transition into Out on the Banks - the first self-penned song on the new album. This song, with it’s gorgeous melody and a story we can all relate to (memories of growing up) confirms Ewan to be a skilful word-smith. Ewan’s own compositions, while retaining a distinct sound, sit comfortably amongst songs which are hundreds of years old.

Ewan is joined on the album by a number of highly accomplished musicians, working with them to find the perfect balance between staying true to the folk song and celebrating the musical talent within the group. The musicians in question are: Lauren MacColl (viola), Beth Porter (cello), Ross Ainslie (whistle) and Inge Thomson (accordion). All support Ewan, who remains at the forefront of the album with great performances on the guitar and banjo and his rich, subtle voice which blends beautifully with vocal harmonies provided by Siobhan Miller.

Stories Still Untold is a stunning collection of songs and an album which confirms Ewan’s name as one of the bright lights on the folk scene today.