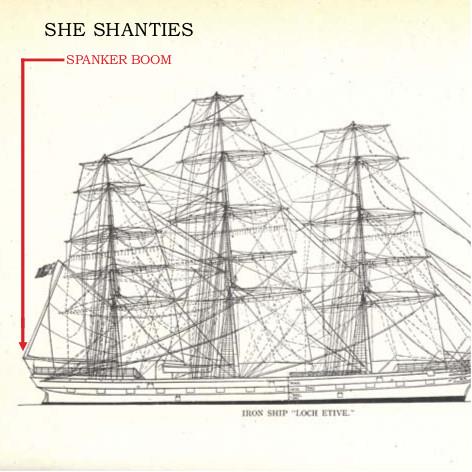 A twelve woman shanty crew no less. And why not, after Port Isaac’s Fisherman’s Friends have essentially dominated the rather narrow genre for some time, popularising their own brand of homegrown community singing and earning mass acceptance and commercial success. Obviously where’s there’s fish there’s brass.

Although, with the Radio 2 Folk Awards current best band The Young’Uns and their bold blend of banter and ballad also laying waste to the provinces, as they peddle their own folk club round the nation, perhaps the appeal of unaccompanied singing is taking hold. Maybe it’s the new black?

The ladies certainly seem to have had their collective tongue firmly in cheek when choosing a title for their EP - mischievously taking the most suggestive and amusing (and officially so they claim) sounding part of a boat. Making up the group are the twelve voices joined simply by the love of belting out a good song, supplemented and fuelled by a drink or two - always good for relaxing the vocal chords.

They’ve taken the fashionable option of using a church to record the songs - it seems to be becoming quite the thing to do and gives the recording the sort of ambience and live feel of of what you’d hear if you were sat in the same room. The seven songs are packed into just over twenty minutes; nothing outstays its welcome and they’ve chosen a strong set of songs, each accompanied by its own background and narrative.

There may be some familiarity to one or two of the songs. Roll Alabama for example, has been popularised and beefed up if that’s the right term by Bellowhead, and the two versions are pretty close cousins.

Without going into too much detail, the shanties fall into a few categories. So we get General Taylor, an anchor heaving accompaniment, Rio Grande, one for the outward bound vessels, and Spanish Ladies for the homecoming ones, while The Diamond and Roll Down are more of the tale telling variety. The latter in particular is taken from Pete Bellamy’s lengthy ballad opera The Transports, told from the sailor’s point of view as they transport convicts to Australia. Fascinating stuff once you start to dig into the background and origins of the material.

On the other hand, Tilbury Town is a relatively modern (1982) song, originally written as Rolling Down The River by Jack Forbes for a radio programme about Tilbury Docks, and sounding very much the part, fitting seamlessly despite its contemporary origins.

By their very nature, shanties can have the tendency to sound a bit samey but it’s good to see someone else breaking into the domain, female voices especially. That their opportunities for hauling away and splicing the main brace might have been limited back in the day certainly doesn’t affect how well they can sing the songs now.