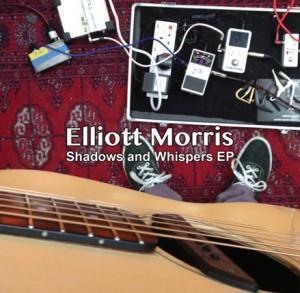 Although he tends to perform solo, he is joined by Gemma Telfer and Sam Pirt on accordion and Kat Hurdley on fiddle, creating a fuller sound.

Choosing well known traditional songs is always risky, but Elliott has put his own stamp on The Unquiet Grave and[ Fare Thee Well. The first is a gentle, laid back arrangement, with an unresolved ending, leaving the listener unsure of the outcome.Fare Thee Well features gently strummed guitar, with the other instruments added gradually, adding depth to the sound.

Elliot’s own composition, Eyes opens the album, and demonstrates his skill as a songwriter and guitarist. Smoke and Mirrors is another gentle song with a bluesy feel. The simple vocal and guitar opening develops with the addition of accordion, percussion and backing vocals.

A promising debut, and an album that will surely be of interest to fans of the singer/songwriter.