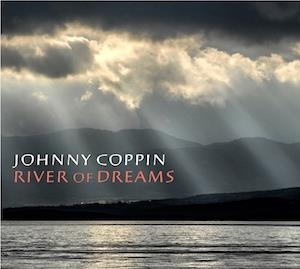 River of Dreams is the latest and highly anticipated release by acclaimed singer, songwriter, pianist and guitarist Johnny Coppin, conceived and recorded whilst in lockdown, representing a wide spectrum of emotions and inspirations.

His song writing draws from a vast range of images, both historical and modern. The opener Bisley Boy refers to the story of a young kid that was chosen to replace the young Elizabeth I, apparently dying, whilst in Gloucestershire, while Let’s Find a Way was composed to praise the British National Health Service workers, who played a key role during the darkest moments of the pandemic.

Eight out of the twelve tracks on River of Dreams are self-penned material, but Coppin manages to give his personal twist to songs from other sources. This is the case of the haunting rendition of The Green Isle and of the very personal interpretation of When the Master Calls the Roll. Another remarkable example of Coppin’s ability in dealing with different sources is given in Long Summer, an evocative song based on a poem written by poet Laurie Lee.

Other highlights include the touching In the Heart of the War, inspired by the stories of the men and women of the Special Operations Executive who worked in France during World War II, and the Song of the Severn, a tribute to the longest river in the British Isles and the goddess that inhabits its waters.

Coppin’s voice has never been so warm, his singing seems to improve with the years, and the arrangements these songs are dressed up in underline his storytelling talent. A special mention goes to fiddler and recorder player Paul Burges and to pianist John Broomhall, who play a major role in enhancing the descriptive power of these lyrics with their lightness of touch.

A crystal clear voice, a line up of great names, diverse lyrics infused with true passion; River of Dreams might just be the pinnacle of this experienced artist’s career.