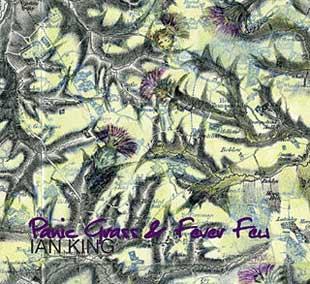 When a new folk artist appears many wonder how he will make his work new, how he will transform the folk tradition or take it to a new level. Ian King builds this album from the roots of folk, twisting the traditional to create a new quirky sound. He certainly places his own unique stamp on the folk music scene.

Panic Grass & Fever Few is an album which draws on traditional folk and instruments from many genres and styles from all over the world. It is a well thought-out album, constructed with passion and precision and challenges the listener not to be complacent with what ’folk music’ should be. Its eclectic mix of brass, strings, electronica makes it ambiguous and engaging.

It is difficult to think of anyone else on the folk scene who really engages with so many song styles and creates such a personal and original mix of songs. The opening track ’Adieu to old England’ is upbeat and the surprising use of the brass instruments really brings it alive. ’Black Eyed Susan’ is a real gem of a song. Influence of modern folk artists such as Seth Lakeman can be heard in its pop like beat which drives the song.

The album consists of traditional songs such as Flash Company (more commonly known as The Myrtle Tree) and Death and the Lady, as well as some reworked sonnets and songs from Shakespeare. ’Should I Your True Love Know?’ from Hamlet (author unknown) is a real testament to Kings ability to rearrange work in his own unique style. He really draws on a wide range of influences and sources for his songs. Moving from Vaughan Williams, Shakespeare, William Cornysh through to W.Perry Merrick and Robert Johnson. This is where his skill lies.

The two songs that leave a mark are ’Ah Robin, Gentle Robin’ and ’The Old Miner’ both well known folk tunes and both songs sung with others. ’The Old Miner’ is the most remarkable and listenable track on the album. Ghetto Priest’s backing vocals alongside King’s subtle voice strikes a heavy chord in the heart and you can not fail to be moved by it. Kings voice is bright, easy to listen to and is what could be described as a ’storytellers voice’ He has real depth and softness of feeling in songs such as ’By George’.

There are two self-penned originals on the album, I would say this is where King still needs to nurture his talents. Some of the lyrics are a little commonplace and predictable and have easy rhyme however despite this the songs tell great stories and it is clear there is talent and ability which in time will create some great pieces.

A few of the songs sound rather similar such as ’Four Loom Weaver’ and ’Death and the Lady’ in there use of instruments however what is clear in the whole album is that King has created songs that span the genres and styles of music yet somehow still remain folky in their style. Some sound Arabian others Asian or Caribbean and others retain the traditional strings that we expect from our British folk music.

This is an artist who has his own unique voice. An artist who has done his research and created a diverse and insightful collection of songs, that strike a chord in the listener and surpass our expectation of what a folk song is. With comparisons in places with Lau, Noah and the Whale and Seth Lakeman, King is an unexpected, humble player who in time could be a real force in the folk world.

King has twisted the folk tradition, dappled it with music and instruments from all over the world and finished it with a sprinkling of his own creativity and original arrangements making this an album with a real ’world music’ feeling. An album to add to the collection and draw inspiration from.

Released by Fledg’ling Records on 25 January 2010.