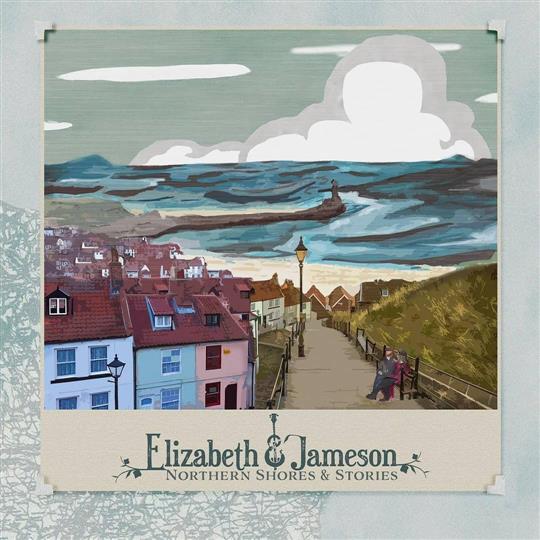 The debut studio album from Bedfordshire-based fiddler Hannah Elizabeth, formerly part of Said The Maiden, and guitarist Griff Jameson, formerly of folk-rock outfit Fred’s House, more than lives up to anticipation, announcing them as one of the brightest new names on this country’s folk circuit.

A concept album inspired by the historical coastal town of Whitby, renowned equally as a fishing harbour and as where Dracula came ashore in Bram Stoker’s novel (the character’s name coming from a record in the local library), it features backing contributions from, among others, Dave Sutherland on double bass, cellist Claire Bostock and producer Stephen MacLachlan on assorted keyboards.

It opens with the mid-tempo, swoopingly melodic Endeavour, named after Captain Cook’s ship, launched in Whitby, with the song inspired by letters from his late wife requesting financial support after being left a widow. Although the song itself, opening with pizzicato violin with Jameson taking lead, concerns more on Cook’s leaving her behind and her endeavour to remain patient and wait for his return.

Featuring the background chatter of locals recorded in a café, the swayalong shanty-feel How Long Has It Been? laments the lost art of letter-writing and was serendipitously inspired by an article titled ’how long has it been since you wrote a letter?’ which they read in The Whitby Gazette while sitting in that very café. Meanwhile, with shared voices alongside guitar, violin and cello, the tumblingly lovely Picture was inspired by Francis Meadow Sutcliffe, a Leeds-born photographer who spent the majority of his working life in Whitby. J

Sung in 30s-evoking crooning harmony and featuring Jameson’s brother Gafyn on parlour-styled piano, Someone’s Missing Someone speaks of falling outs and loss and came about from them seeing all the posters in windows around the town asking for information on missing persons. The album takes a turn into oral history with Bet & Terry, a poignant account of how a friend’s grandparents met in Robin Hood Bay and became a lifelong couple until the latter’s passing in 2014.

Fittingly enough introduced with the sounds of the wind and waves before a fairground whirligig gives way to Jameson’s vocals, Live By The Sea is a jaunty-paced shared verses fantasy about packing their bags, leaving the rat race and moving to the coast before, picking up on the Stoker associations, things take a darker note with the slow waltz love song I Will Wait as they sing “nothing can stop us tonight, not even death”.

Love eternal is also at the heart of Dance In The Shadows. Announced by a church bell’s striking before Elizabeth’s lurching violin, cello and harpsichord pick up the swirling waltztime melody as she sings a number inspired by discovering the grave in the local cemetery shared by Francis and Mary Huntredds, childhood sweethearts both born on the same day in 1600, married on their birthday and who died within hours of each other on their 80th.

One of the delights of the area is the local brews, and one such provided the spur to write the stompingly playful Bottomless Beer, the rousingly played tale sung from an ale enthusiast’s perspective and featuring just the duo using guitar for percussion, based around their misunderstanding - and disappointment - in thinking they could have unlimited refills.

They end in epic mode with the eight-minute plus Black Amber, more atmospheric instrumental than song (and the only track to feature electric guitar, with MacLachlan providing the ’additional sounds’). A rapt Elizabeth celebrates the titular gemstone, the Whitby Jet, used in jewellery-making through the ages and reputed to have magical qualities. It may not, but this album most certainly does.

Self-released on CD May 15, 2020. Recorded, produced and mastered by Stephen MacLachlan