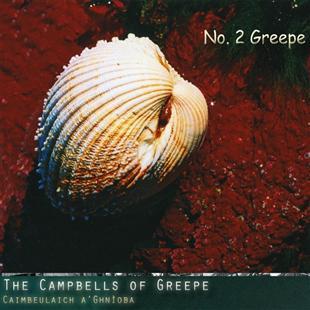 The Campbells are a piping and singing family from the Isle of Skye consisting of brother and sister Seumas and Kenna Campbell, Kenna’s daughters Mary Ann and Wilma Kennedy and her niece Maggie Macdonald. They all sing on the album, with Mary Ann also playing piano and dulcitone. Other musicians add guitar, pipes, whistles, bass and percussion, but the emphasis is always on the human voice.

There is a good deal of variety in the 14 tracks on No. 2 Greepe, many of which are in the traditional “puirt-à-beul” style, sounding more like dance tunes. These must be a challenge to sing but somehow the Campbells make them sound effortless.

The album opens with a song in this style, Na Puirt Cruinn, accompanied by guitar and whistle. The singing is very tight, and very effective, even though it is all in unison. A’ Mhuc a Bh’ Againn A’s an Dig is in a similar style but starting with a solo, with unison female voices gradually added. There is also a sparing use of harmony in this track. Na Bodaich adds another layer with a complex arrangement accompanied by guitar. Male and female voices combine in harmony and contrapuntally.

There are quieter moments on the album too. ’S Gann Gun Dirich Mi Chaoidh features a solo female voice accompanied by guitar, joined by the other women in the refrains. The cascading vocals and whistle form a beautiful combination. Mo Chailin Donn Og is just for male voice and guitar.

Ailein, Ailein, ’S Fhad an Cadal is sung a capella, initially by the women, but joined by male voices, creating a rich musical texture.

The pipes make an appearance in Seinn Iu Ro Bhinn Oho, a haunting song built over a single note pipe drone. The mood of the song changes as the women join in with harmonies, and the pipes eventually take over the tune.

Na Coireachan is a combination of the other styles used on the album with mixed a cappella voices being gradually joined by guitar and pipes. The syncopated rhythm and gathering speed make it rather exhausting to listen to!

The album ends with an archive recording of Maggie MacDonald’s mother, Ann Michie, singing Seinneam Cliu Nam Fear Ur, underlining the tradition being passed down the family.

The CD liner promises full lyrics and translations of the songs on the group’s website, but sadly these are not there yet. It would be good to know what the songs are about, as for those who cannot speak Gaelic, one can only distinguish between a happy or a sad song. Online translators are no use either! However, those of us not fluent in Gaelic can still enjoy listening to No. 2 Greepe.

The Campbells of Greepe discography