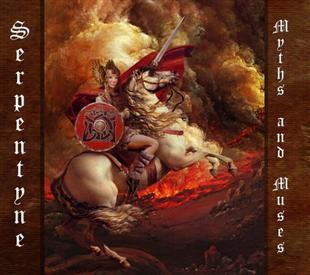 If current predilections for genre-splicing aren’t your thing, an album of mediaeval club music might make you think twice. Alternatively, you may recognise that dance, and rave in particular, are a natural extension of the tribal, communal need for expression that pre-dates the Middle Ages, so why not?

It’s certainly a wake-up call for the ears when the opener is a toe-tapper about the Iceni warrior queen Bouddica. To give you some idea of the incongruous nature of the music, how often are you likely to see ’toe-tapper’ and ’Boudicca’ in one sentence?

Follow-up Alexandria runs a little long and is probably very authentic, but a little like listening to warm up music for the actors in Game of Thrones. In fact, and slightly unfairly, the album conjures several contemporary images; the dance scene in Matrix Revolutions and crowded markets in Robin Hood amongst them. There’s a strong whiff of film and TV score about Myths and Muses.

Myths and Muses is loosely a concept album about female warriors through the ages. Unlike their debut album, Stella Splendens, principal vocalist Maggie-Beth Sands and multi-instrumentalist Mark Powell have written some of the material here.

Owning the arrangements allows them to expand their creativity in layered ambient electronic sounds and beats, some quite intense, that accompany the various styles. Those styles, robust djembe and choral vocals on forthcoming single Valkaryies, North African rhythms on the catchy Gaudete, Latin chant on Hymn to Cynthia and the French bagpipes and smallpipes combination of the 14th century Je Vivroie Liement (I Should Lead A Happy Life), are held together by the contemporary beats underneath.

Douce Dame Jolie is introduced with didgeridoo and builds on a modern arrangement - with Gaudete it’s the most accessible track for new listeners. Pastyme With Good Company starts like a beefed up New Order with progressive tendencies, but the snare drum and melody are rather shoe-horned around the 16th century lyric and it sounds forced.

Don’t discount the quality on offer here. A lot of the songs are catchy and undeniably well played, but having said that, it’s difficult to see how this will appeal to an audience wider than that travelling to the Summer festivals or followers of ancient traditional song with broad shoulders. For all the earnest endeavour, skill and historical accuracy, and there is plenty of all three, it remains a singular form even among the burgeoning folk scene.

Released via Serpentyne Music on February 16 2015.