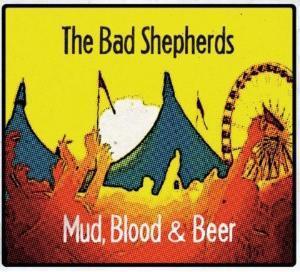 One wouldn’t expect what essentially began as a novelty act to lasts for three albums, but the Bad Shepherds have achieved just that with Mud, Blood & Beer. The reason is of course that they are a talented bunch of musicians, led by Adrian Edmondson on “thrash” mandolin, ably supported by Andy Dinan on fiddle and Troy Donockley on uillean pipes, cittern and whistles.

On the previous albums, all the tracks were covers of punk and new wave hits enabling those of us of a certain age to wallow in nostalgia. What marks this album out is the fact that the band have included two original tracks, a song (Mud, Blood & Beer) and a lilting Celtic tune (Off to the Beer Tent), both a tribute to the great times the band have had at festivals - in fact, many of the festivals they have played are mentioned in the song, and listed in the liner notes.

There is a Celtic feel to the arrangements, which while many are less “gutsy” than the originals, still have plenty of energy. The Stranglers’ classic, No More Heroes, for instance, is given a much lighter treatment, but with a driving riff from the instruments. Going Underground is much more lyrical here, with some lovely fiddle links between the verses. Our House has mainly low key vocals and accompaniment, but the instruments are allowed free rein between verse, launching into a great tune at the end. The musicians really get to show off their talent in the instrumental breaks.

The Lunatics Have Taken Over the Asylum has an almost Baroque introduction, with the theme running through the song, which increases with intensity with some lovely close harmonies. The whistle introduction to What a Waste gives the song an other-worldly quality.

As well as the fast-paced tunes, the Bad Shepherds can also do a poignant song well - Gary Gilmore’s Eyes has a wonderful jig-like accompaniment on pipes while Shipbuilding has a stark and minimalistic arrangement to match the subject matter.

The Bad Shepherds began as a fun band, but have proved with this album that they deserve to be taken seriously too, whilst still sticking to their original remit.