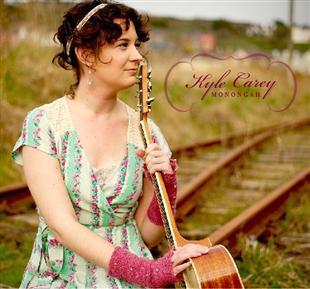 There are times, few and far between, when a singer’s voice is just perfect and when they’re building an album they do the sensible thing and leave themselves plenty of musical space to show it off. Kyle Carey’s debut album Monongah is one of those times. Carey draws from poetry and traditional American songs to bring an album full of contemporary folk songs that you’ll struggle to dislike.

The American influence is plain to see in tracks like John Hardy’s Wife and Orange Blossom. The first is based on the story of the traditional song John Hardy, but instead telling it from the viewpoint of John’s wife. The story is fun and upbeat, but the fiddle solo can’t help but remind you of American-style playing and tune-writing. Orange Blossom tells the tale of a train that travels between New York and Miami and has Carey speaking at a quick speed. There’s very little that doesn’t make you think of various American folk songwriters. In fact, it’s difficult not to hear Joni Mitchell in a few of the tracks.

Though most are American style affairs, there are a few that aren’t. The a cappella track Let Them All Be is a heartfelt track which stays for exactly the right amount of time, which is Carey’s version of a Gospel Ballad. There’s no real story behind it, and as the rest of the album has a real purpose it’s nice to have a track that is just there for the pleasure of listening to.

There are two tracks that stand out by being so different - the title track Monongah and Gaol ise gaol i. Gaol ise gaol i is such a strange track as it’s in Gaelic, but even without the language change it’s much more Celtic than the others. Monongah is similar, in that the American influences that Carey evidently draws from are much more subtle. This in itself isn’t too much of a problem, but as openers they set the rest of the album up in a way it can’t possible deliver.

There is one recurring theme throughout the album, and it’s how the tracks don’t seem to end correctly - a lot have a story that she tells and then just seem to musically end as soon as the narrative does. It feels strange when it happens, as if there’s more of a story to come but the music just ran out as opposed to the other way round.

This is a real shame, because Carey’s voice is a dream to listen to. It’s unashamedly American-style songwriting, but that’s not a bad thing. From the sounds of the album, she’s certainly someone to watch out for on the live scene - her storytelling is emotional and it’s difficult to get that from a CD. If you’re a fan of American contemporary folk then you’ll be right at home here, and if you just like listening to an almost perfect voice then you’ll not be disappointed.