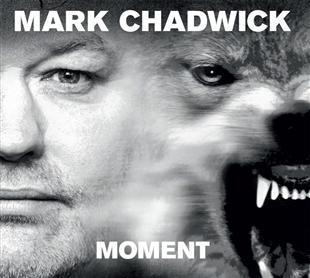 Moment is the second solo album from Mark Chadwick. Co-founder of Levellers, Mark is already a recognised and respected musician, but his solo venture has a very particular focus: the effectiveness of simplicity within his music. A concept which is fully explored in Moment, Mark has created an album with a distinctive sound and a straightforward no-frills approach to creating music. And with rock n roll - alongside folk - playing an important part in the finished product, it certainly appeals to a wide audience.

The album features musicians on drum, piano, violin and double bass. With each musician playing without outside direction the album certainly feels much more natural - a difficult sound to capture when dealing with recorded music. Indeed Mark has taken his desire to create an album ’fresh’ and ’quick’ one step further - by recording each track after only a couple of rehearsals. The material was shared between the musicians without weeks or months of perfecting the songs, suggesting that each of the ten tracks takes on a new dynamic with each performance.

Waterfall is the opening track and sets the standard for the remainder of the album. It has a memorable melody, powerful vocals and an ensemble of musicians who help bring Mark’s musical vision to life. Particular mention should be given to the effective violin riffs which lift the track and contribute to the drive and fervour of the whole album. Indeed the violin acts to lift the weight of all other instruments and adds feature points to certain tracks, particularly Killing Time.

In contrast to the tracks which are fairly up-tempo, Daughter amongst others, is a slightly slower number and, along with added vocal harmonies, allows all instruments a moment in the spotlight. This track, with its layers of melodies and vocal parts confirms all the musicians as creative arrangers, especially considering the short time scale of the project (recorded and mixed in seven days).

In line with Mark’s focus on simplicity, his interest in what are often interpreted as the most complex and misunderstood topics - ’drink, life and love’ - adds an interesting twist to the album. However, the lyrics themselves are often easy to relate to and can thus be interpreted by the listener in many ways, perhaps confirming the simple to be extremely effective when connecting and communicating with audiences.

Moment is an album with a very definite and very different idea of how music should be rehearsed and recorded. It draws on the immediacy of early rock n roll along with the simplicity and beauty of folk songs. The former style certainly takes centre stage throughout with vocals and arrangements likening themselves to the sound of the 50s and 60s. Fans of the era and indeed of both genres will no doubt be delighted by the finished product.

Released on 16th June 2014 by On The Fiddle Publishing