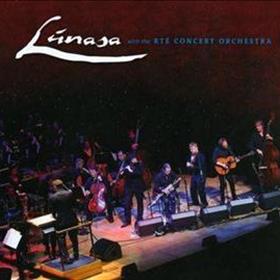 Writing a review takes time: repeated listening to pick up all the nuances and form a full opinion, and then getting that down into words for everyone to read. So it is always a joy when an album is a real pleasure to spend time with.

Lúnasa return with their latest album, and a new take on their already fresh-sounding Irish folk tunes. Teaming up with the RTÉ Concert Orchestra the album takes the listener on a journey through some old favourites, but with new twists and drama to each.

The addition of the orchestra allows for some fabulous arrangements, though they never overshadow the band or sound at all out of place. The first tune set, Casu, is a gentle introduction to the orchestra, with them very much playing a supporting role, most beautifully when the horns subtly add their weight to the final tune, Muineira de Casu.

Spoil the Dance contains some fantastic string augmentation, including sections of lovely pizzicato. What is particularly striking is that the strings are used to emphasise the rhythm section rather than the tune. This is really getting to the heart of the Lúnasa sound, as the band always try to seek out the heartbeat of a tune.

The Last Pint is a beautiful tune, that begins with flutes/whistles playing in unison, a soft and lilting sound. As with all the tracks on this album, the tune then builds to a crescendo and a very satisfying conclusion.

Merry Sisters of Fate allows Trevor Hutchinson to really come to the fore with the double bass. In the opening of the track it almost becomes a rock guitar, providing an insistent and powerful influence over the track.

However, the stand out track is probably An Buachaillín Bán. It has the most slow and poignant opening, concentrated on the orchestras strings. Then the Uilleann pipes start to sing their heartfelt song. The liner notes don’t explain what the tune is about, but the emotion and expression is pure delight to listen to.

Lúnasa with the RTÉ Concert Orchestra is an excellent album for lovers of Irish music, but also one for general folkies. The arrangements and musicianship makes this an album for all to enjoy.