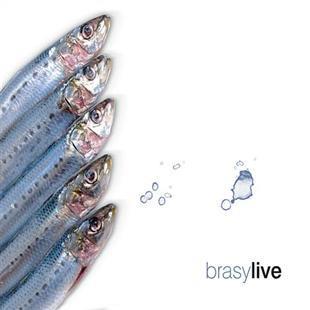 Try to imagine a combination of the King’s Singers, the Swingle Singers and the Spooky Men’s Chorale and you are some way to imagining the distinctive sound that Brasy make.

This album was recorded live for Polish Radio, so of course the links between the songs are in Polish. This will not spoil your enjoyment of this album though and the fact that it is a live recording demonstrates how polished their live performances are. As with their recent live appearances in this the UK, this five piece male voice choir will treat you to gorgeous harmonies delivered with choral intricacy and precision and a healthy dash of humour.

There are several well-known English language standards on the album, such as Stephen Collins Foster’s Hard Times, Lowlands, Hilo Johnny Brown. Shiny-Oh is great fun and Irish Lullaby is exquisite.

Even songs which would be considered too twee or “old hat” for a singaround in a pub are given a new lease of life when in Brasy’s capable hands. On this album Loch Lomond and Drunken Sailor are given the Brasy treatment.

Some songs are in Polish but to familiar tunes eg Hey Haul Away, with verses in Polish but the choruses in English. Roll Her Down the Bay to Juliana also puts in an appearance as part of Lowland Emma.

The album is a well-balanced mix of gentle, lyrical arrangements and rousing shanties. Their versatility is also demonstrated in their take on the old French drinking song Tourdion, where the tune is not only in French but very fast!

The use of online translators has not proved very satisfactory in providing the meanings of the songs titles (although Sztorm and Pompowa are obvious), but that doesn’t matter. The musicianship speaks for itself.

In my head, certain shanties are now always sung with a Polish accent.