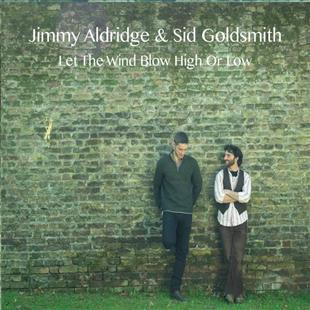 Jimmy Aldridge (banjo) and Sid Goldsmith (guitar) have been gigging for several years and have now released their first album, Let the Wind Blow High or Low.

Their music is firmly rooted in the traditional music of the British Isles with some original material, and the occasional foray across the Atlantic.

A wealth of human experience is represented in this recording - from the hell of working in harsh conditions (The Chemical Worker’s Song and the Bonnie Ship the Diamond), to the Gaol Song, to the beautifully poignant Cottager’s Reply, and the usual love and drinking songs (The Gardener and the title track). Others have a more celebratory tone, such as What You Do With What You’ve Got.

The duo are able to turn their hands to a variety of styles. The listeners gets gentle, poignant songs like the Gardener (written by Sid, and reminiscent of the Seeds of Love with its references to red roses and willow) and the Cottager’s Reply, a poem by Frank Mansell, set to music by Chris Wood.

The banjo of course lends itself to American music and it is represented on the album by The White Dove (based on the traditional English song The Cuckoo) and L & N Don’t Stop Here Anymore, a song written by Jean Ritchie about the Louisville and National Railroad.

Excellent musicianship and sympathetic instrumentation are twinned with fine harmony singing on this album. Nowhere is the quality of the sing more evident than in the completely a capella Hold the Lantern. Jimmy and Sid’s skill as instrumentalists is also demonstrated in the tunes added to some of the songs, for example Tralee Gaol/Clinch Mountain Backstep and Wynchburgh Junction.

An album with plenty of variety to keep the listener interested.

1. Gaol Song/Tralee Gaol/Clinch Mountain Backstep
2. Chemical Workers Song
3. L & N Don’t Stop Here Anymore
4. Paddy West
5. Hold the Lantern
6. Let the Wind Blow High or Low
7. White Dove/Wynchburgh Junction
8. The Gardener
9. Keep Your Hand on the Plough
10. The Bonnie Ship the Diamond
11. What You Do With What You’ve Got
12. The Cottager’s Reply