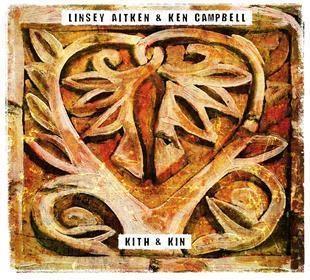 Although Kith & Kin is the first album from Aitken and Campbell, the duo have been part of the Scottish folk scene for many years. Aitken (vocals, cello, piano) and Campbell (vocals, guitars, Northumbrian pipes, laud) met whilst playing in The Ideal Band and have been touring together as a duo since 2010.

Aitken and Campbell describe Kith & Kin as their musical manifesto. The songs and tunes on this album mix elements of their respective backgrounds in classical, contemporary and traditional music.

The album takes as it theme the people of Scotland and their relationship to both each other and the world. The first piece, Northern Winds, is a 19th Century drinking song from Glasgow set to a Scandinavian tune. The lyrics’ sentiment of friendship in drink is illustrated by robust vocals and guitar from Campbell with a driving cello accompaniment from Aitken. It’s an impressive start.

Things slow down with Where the Scots Pine Grow written and sung by Aitken. This song is in praise of all “the good, honest, ordinary Scots folk who made our land”. It’s well sung and the verse has a lovely tune.

The Scottish diaspora is a theme of many of the songs on the album. Island of Hope incorporates the actual reminiscences of immigrants that passed through Ellis Island into the lyrics, whilst Redlegs tells the little known story of Scotland’s lost tribe of Sugar Slaves in Barbados.

There are a couple of traditional songs on Kith & Kin. Wild Roving is a variation of the folk club staple set to a tune learnt from the singing of Sylvia Barns and Mick West. Deftly arranged by Aitken, it’s refreshing to hear a different version of this piece, which can become trite and meaningless in the wrong hands.

Wheel of Fortune is a traditional chorus song from Northumbria learnt from the singing of Jez Lowe. It’s well sung by Aitken and is paired with a lovely waltz written for her daughter, Gabby.

Aitken’s talent on the cello comes to the fore on The Giving Kind. This is a funky tune written for her Polish Uncle Stephan. Although the tune is written in a traditional style it changes genres for a jazzy middle section before being brought under control again. This is the standout piece on the album which gives full reign to both Aitken and Campbell’s musicality. Tasteful percussion from guest Stevie Lawrence enhances the track.

Departing Song, adapted by Campbell from various sources, is a precursor to the more famous The Parting Glass. This is coupled with a tune played on the Northumbrian Pipes, written by Hamish Moore about Barga, “the most Scottish town in Italy”. The piece summarises the themes of the album as a whole and is the perfect closing song.

Kith & Kin presents the listener with over an hour of songs and tunes by Linsey Aitken and Ken Campbell. It’s an eclectic mix of the traditional and the modern, and is a promising beginning for a duo who are certain to gain more converts to add to their already thriving fanbase both here and overseas.