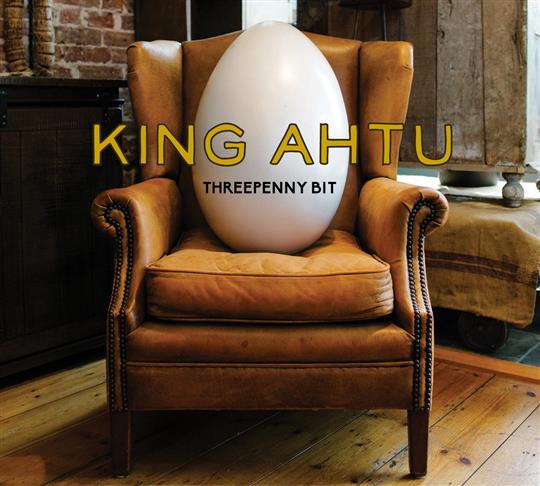 Southampton-based Threepenny Bit have gained a reputation as one of the most experimental folk collectives. Their fourth album King Ahtu proves no exception with its adventurous and addictive rhythms and distinctive mix of traditional dance music with modern genres.

The sounds of flute fiddle alternating to a soft accordion accompaniment kicks off the album before the line-up joins in the lively Drummond Castle, a track that captures not only the rock influences on the band’s style but also some Balfolk elements. The versatility of their arrangements is noticeable when one compares tracks such as I’m King Ahtu or Sula’s with Katie’s or Reprise. The first two feature numerous changes of pace, with saxophone and clarinet joining more established folk instruments for energetic dance tune sets, while the latter ones represent quieter havens in an engaging and fast moving release.

This eight piece collective is far more than a ceilidh band, it incorporates so many motifs from jazz, progressive rock, funk and classical music that every listen to this album reveals something new to discover. The result is an uplifting experience; with delicate flute and fiddle passages evolving in rapidly changing climaxes, warm sounds and captivating arrangements as in Cuckoo’s Nest and A Big Egg, the track that surely inspired the cover artwork.

It can take years to perfect the balance between eight members with different musical backgrounds; but Threepenny Bit manage to reach the target without losing any of their members’ individual touch. Following the successful Pantomime Cannon, the ambitious King Ahtu pushes the collective’s artistic exploration a bit further, reflecting the infectious energy of their live performances and creating musical landscapes to be savoured many times over.

Released on CD and digitally on 3 December 2019, recorded, mixed and produced by Pete Ord at Half-Ton Studios, Cambridge, and The Studio at Sunbeams, Penrith