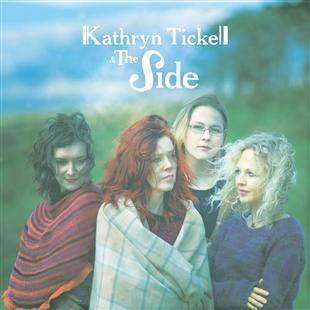 Kathryn Tickell and The Side - award winning Northumbrian pipe and fiddle player Kathryn Tickell’s new ensemble - has recently released their début album. The band also features Amy Thatcher (accordion and voice), Ruth Wall (harps and voice) and Louisa Tuck (cello). While Kathryn and Amy are familiar faces on the folk scene, Louisa and Ruth are perhaps more at home with classical music - but the results of this collaboration of musicians and genres is nothing short of superb.

Instead of an obvious divide between the two genres, the quartet has created arrangements which allow the two musical disciplines to run effortlessly together. Creative and mesmerising harmonies throughout the album, and the exploration of different moods, dynamics, atmospheres and themes using each of the instruments, ensures that the performances delivered are memorable.

The album opens with two traditional pieces: Early Air (English) and Tullochgorum (Scottish), with the former - based on a well known song but taking on a gorgeous new setting - striking in both arrangement and performance. These opening tunes set the scene for the remaining eleven tracks: where songs and tunes with threads of Irish, Scottish and English (and even Danish) traditions run throughout - allowing for a great mix of musical styles.

The album appears to celebrate a whole host of things: from collectors to places (particularly near where Kathryn hails from) as well as notable historic events. As a result, the album is steeped with culture, adding real interest and depth - the sleeve notes are certainly worth a read in respect of this as there are some truly absorbing stories behind many of the tracks.

The four musicians work beautifully together, and the versatility of each is commendable, with seamless transitions from tunes which draw the listener in with a steady, dramatic sea of harmonies and floating melodies to those which are a little more up tempo. What really makes the album stand out is the group’s commitment to exploring traditional music through collectors and original compositions while putting a very unique and refreshing spin on their material.

Kathryn Tickell and The Side: vibrant and energetic musicians with a sophisticated and distinctive sound - a collaboration certainly not to be missed.

Kathryn Tickell & The Side discography