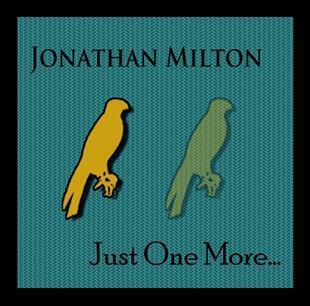 Just One More is the debut album from Texan multi-instrumentalist Jonathan Milton. He plays wooden flute on every track on this album, joined variously by guests on bouzouki, guitar, banjo, fiddle and percussion.

While he may be American, his sound is firmly rooted in the traditional music of Ireland. The tunes sets here are seamless combinations of traditional and original material.

The album begins with Sunday Brunch, combining flute and guitar, showing off Jonathan’s virtuosity on the flute immediately. However, while there is no doubting Jonathan’s prowess as a flautist, it is a shame that there is little change of mood, in spite of the variations in accompaniment.

Many of the tune sets are in this first style. Coop’s Tune begins gently but quickly speeds up, but does end with a lovely ethereal passage from the solo flute. Munster, Gander and Neil’s Jig are also in similar style.

However, there is some respite from the high speed tunes in the shape of The Slipper, which is an interesting interpretation of a hornpipe, delivered in a light gentle fashion with jazz style percussion and bass. This fusion of styles works really well. Natalie Jane is more of a dialogue between the flute and accompanying instruments than on the other tracks, and @jackie_dot starts with solo whistle, joined by the banjo.

Many fans of Irish music will enjoy this album, but while there is no doubting Jonathan’s skill on the flute, it would have been enjoyable to experience his virtuosity on other instruments too.