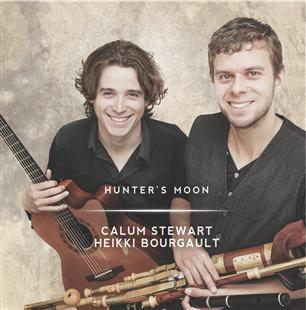 Hunter’s Moon is the second recording from the productive Scots-French partnership which came together in 2008 to explore what they call their ’interceltic link.’

Calum Stewart’s pipes and whistles carry the strong Scots melodies while Heikki Bourgault’s mastery of open tuned guitar portrays the strong tradition of Breton musicians. It’s a fascinating blend which results in their versions of a collection of old and new melodies and original tunes mixed with their takes on the traditional.

Recorded, naturally, in both Scotland and Brittany, the album opens with five minutes of Lough Gowna, setting a potent Celtic scene, combining the reels and jigs of The Banks Of Lough Gowna, The Mouse In The Mug and Bill Malley’s Barndance - all very stirring and a clear statement of intent about what the pair do well together.

The lengthy An Coire Bhreacain (The Unsettled Cauldron) gives the pair a chance to play through a number of tunes, both traditional and contemporary, including a couple of Bourgault originals.

A couple of pieces, Another Winter and Toward The Sun, did have the strange effect of conjuring up a personal vision of the English greenwood and, should Clannad not be available to revisit their soundtrack pieces for any future remake of the eighties TV classic Robin Of Sherwood, then our two boys would certainly be up to the job.

The instrumental prowess and dynamic interplay throughout the album is tremendous and it all feels a very natural partnership - Heikki’s guitar occasionally taking the lead yet in the main providing a sturdy and sympathetic rhythmic backdrop for Calum’s range of pipes and whistles to carry the melodies. It’s the sort of inter-nation/cross-cultural amalgamation which gives instrumental folk music a good name.

Album was launched at Celtic Connections in Glasgow on 24th January 2014.