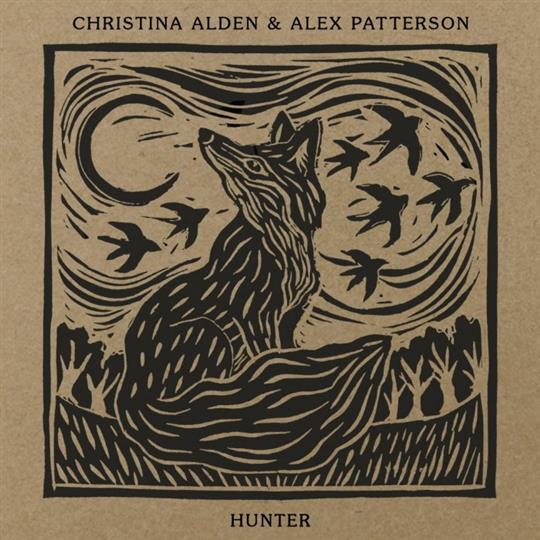 Hunter is the debut album by Cristina Alden and Alex Patterson as a duo, a ten track release recorded in the very heart of Norwich City Centre whilst in lockdown, displaying their instrumental skills and their songwriting talent.

The album opens with the delightful title track, a perfect sample of the duo’s sound, balancing fingerstyle guitar, influences from North American folk music and the genuinely warm expressiveness of the well-established British school. The themes they explore in their songs are often related to the contemporary world, mostly about ecological consciousness and nature, but these lyrics and the way they deliver them have a timeless quality.

There are also two instrumental tracks on Hunter, the tranquil New Year Waltz and the traditional sounding March, both self-penned tunes played on fiddle and guitar, classy bridges between the different sections of the album.

Together with the expressive and heartfelt interpretation of these songs, the arrangements are praiseworthy. Skilful and often intricate textures on fretted instruments underpin the lyrics without overwhelming them.

Take for example the multi-layered setting of My Flower, My Companion and Me, the only traditional song on this album, in which banjo adds a distinctive touch, or Greenland Shark for which the two voices interweave on a gentle substrate of tenor guitar.

The way they raise awareness of the climate change crisis and of the importance of rewilding and enabling space for nature to flourish, their ability to mix elements from other traditions without moving away from their English roots, and everything else makes Hunter both a milestone for contemporary folk songwriting and a great starting point for this duo’s musical voyage.