The Hut People - Home Is Where The Hut Is 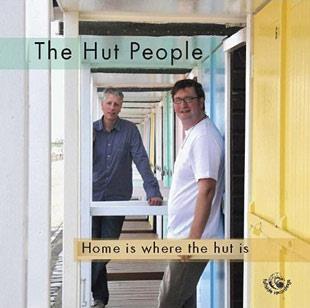 The Hut People, named for the hut in which their early jamming sessions took place in 2008 are accordion/percussion duo Sam Pirt and Gary Hammond. Accordionist Sam Pirt has been active on the folk scene for many years, winning the Radio 2 Young Folk Award in 1999 with ’422’, while Gary Hammond has recently moved into folk music after 12 years with ’The Beautiful South’ and a long list of world music and jazz collaborations.

Their debut album, ’Home is Where the Hut Is’ is a really interesting combination of British, Nordic and European folk with world music influenced percussion. The steady core of the album is Pirt’s excellent accordion technique which is layered with Hammond’s enormous range of percussion instruments from around the world, two of the more unusual examples being the ’Helix Bowl’ and ’Static Whip’. Not one to be left out, Pirt also weighs in with foot-percussion on some of the tracks.

I found this to be an album that very much rewarded repeat listening, with a lot of subtlety and sustained interest. Well worth buying and spending some time with.

The Hut People are Sam Pirt & Gary Hammond. Released by Fellside on 1 February 2010.