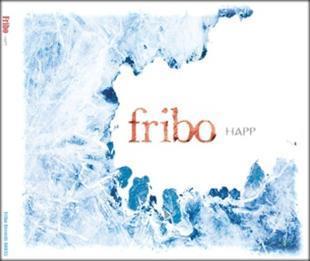 Fribo are four musicians from the UK and Scandinavia and are influenced by Celtic, Scandinavian and American music. Happ (an old word meaning ’In good health’ from the Norn language which was once spoken both in Scotland and the Nordic countries) is their second album and contains an exciting selection of tunes and songs in a variety of languages.

The band’s sense of fun shines through not only in their playing but also in the titles of some of their tunes. A preoccupation with goats is evident, eg Many Little Sheeps & Goats Jumping Around on a Green Meadow and Boat Full O’ Goats.

Tunes play a major part in the album, but there are some lovely songs - the opening track is a gentle song called The Scythe. The second track is much more lively and is a tune/song mixture, including the intriguingly titled Outlaws Don’t Dance Waltzes. Tune singing features in several tracks, particularly All The Night I Lay With Jockey/Salt n’ Pupper. This has long been popular in Nordic countries, and also in Scotland (where it is called puirt-a-beul and can be found on Julie Fowlis’ recordings). Lady Maisery have recently revived the practice in England on their album Weave and Spin.

An interesting blend of cultures, and traditional and modern material have resulted in an excellent album.