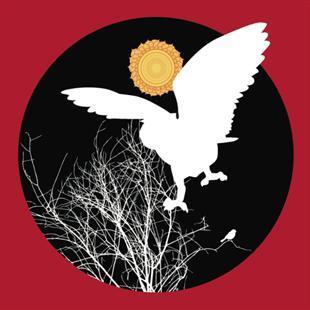 With a band name taken from a cult children’s novel of the late 60s, and a musical sound to match, the Owl Service’s Garland Sessions offers you 19 tracks of glorious nostalgia. This album is a re-working of a shorter one released as just 100 copies in 2007. On this version, the original tracks have been reworked and some more added.

The Garland Sessions contains mainly gentle arrangements of traditional folk songs, punctuated by a few instrumentals, with the occasional hint at folk rock - there is a lovely (if rather brief) guitar solo towards the end of The Rolling of the Stones for instance. There is a mystic theme to this, and many of the other songs: The Bear Ghost and Two Magicians (which has dancing fiddle passages between the verses, and is one of the more rocky numbers) to name two. Some nice Hammond organ-style keyboard is included on some tracks too.

As well as mysticism, we have some have rather more sinister songs - the Lyke Wake Dirge which sends the soul on its final journey, [Katie Cruel in which something has happened in a girl’s life to change people’s attitudes towards her, and the long instrumental at the heart of the album, The Dorset Hanging Oak.

This is the longest track fading in gently with jingling percussion, soft drones, a sitar solo, and distorted guitar chords. The repeated phrases move in and out of focus to produce a hypnotic piece.

The well known traditional song Oxford City appears in a very simple arrangement, with just a solo vocal over drone - a very effective way to tell this cautionary tale.

The album forms a rather haphazard journey around England - the Lyke Wake Dirge from the North York Moors, the tree used for hangings in Dorset, poisonings in Oxford and the instrumental track The Hoodening referring to a Kentish tradition, similar to Mumming.

With so many tracks, it is difficult to digest the whole album in one sitting, but it is worth persevering and enjoying the rich tapestry of sound it contains.