Jenny Sturgeon - From the Skein 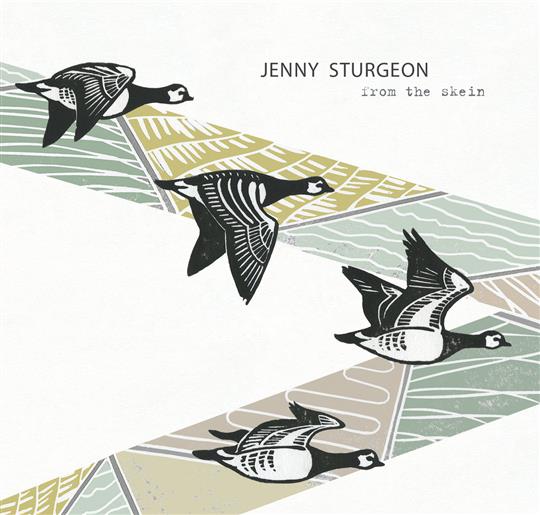 This debut album by singer-songwriter Jenny Sturgeon is rooted in the traditions and stories of Scotland, and in particular the north-east coast around her home town of Aberdeen.

The twelve songs offered here range in subject matter from folklore through local history to pieces of a more personal nature. What binds these songs together is Sturgeon’s clear, expressive voice and the sheer quality of the material.

Maiden’s Stone, which kicks off the album, tells of a young woman who refuses to marry the devil and gets turned into a statue for her disobedience. Fraser Fifield’s low whistle playing lends a jazzy edge to the song which feels like a newly discovered traditional ballad.

As Sturgeon is a biologist it comes as no surprise that many of the songs are shot through with images from nature. Raven paints a picture of a cold landscape where the doe ’shelters from the cruel, cruel wind’ and uses this as a metaphor for loneliness. Although the tune is original it has, especially in the chorus, echoes of the shanty tradition.

It’s not often a song mixes up the folk and drum & bass traditions but Running Free does just that. This simple song, about the joys of parenthood, is transformed by accordion, shruti and D&B beats into a celebration of life and letting go.

The shruti is used most effectively on Selkie, a piece about that mythical changeling creature. The song is notable for the Carnatic singing of Rahul K. Ravindran whose improvisations lend the piece a suitable mystical air.

Ravindran also lends his talents to Linton, a song about the designer of the Cutty-Sark. This is a light and airy piece, joyous in its celebration of a local man made good. It’s one of the highlights of this album.

Cùlan is an island variation of the cruel sister. Taking her inspiration from the storytelling of Claire Mulholland the song makes use of some striking imagery, especially in its final verse. The chorus is sung in Gaelic by Ana Maia MacLellan who also co-wrote the song.

Fair Drawin’ In, the final song on the album, is a meditation on the brevity of life. It should be a bleak affair but Sturgeon finds hope even when the cogs have turned to rust. When the morning light breaks through the fog, Sturgeon says, the warmth negates the coldness.

From the Skein is an impressive debut album. Its twelve songs announce the arrival of a significant new talent whose work stands head and shoulders above most new singer-songwriters. This is a record that deserves to be heard.

Produced by Simon Gall, Jonny Hardie and Grant Anderson. Released on the 10 June 2016 on Tamarach Records.