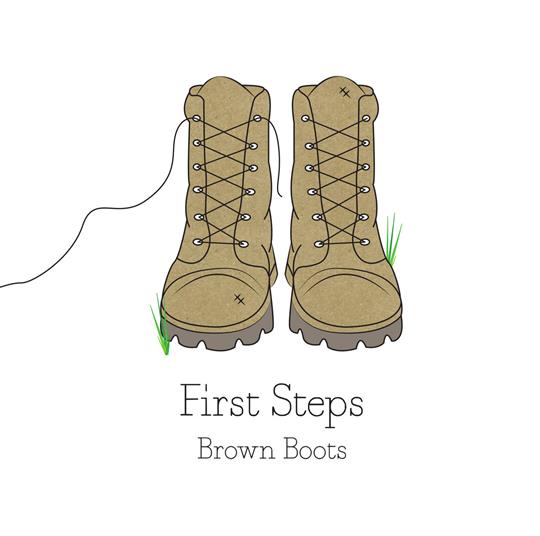 Brown Boots are Will Allen (melodeon) and Martin Clarke (fiddle), a duo of young and talented musicians based in London. Their debut album First Steps is a dynamic collection of energetic traditional dance tunes, mainly from Britain and Ireland, with some French, Danish and American compositions, that conveys the infectious energy of their live performances.

The vast majority of these tunes comes from manuscripts and collections dating from the 17th and the 18th centuries, plus a few self-penned compositions. The album opens with Foula, a medley of the eponymous Shetland jig and The Old Favourite, whose name probably derives from a pub in North London, before moving into the captivating hornpipe Barham, written to celebrate the return of Charles II in 1660, the first of many tunes directly taken from the Playford collections.

The magnificent Flowers closes the first half of the album, a seven minute long medley of stunning tunes, including the renowned jig Quick and Merry, played up tempo, possibly the most remarkable track of the entire album for the dexterity and the sensitivity displayed in combining and interpreting such a variety of melodies from different sources. The Anglo-French set La Contredanse is another example of how these two put their verve and virtuoso playing at the service of musical expressiveness.

Despite the fact the album is packed with fast-paced sets, there is enough space for a few quieter passages such as the first tunes in Tunbridge and Pipers, a slow air setting of a traditional dance tune and a pibroch respectively.

From a careful listen of the entire album and a read through the very informative booklet that comes with the CD, it is clear that labelling First Steps a mere display of free-flowing playing would not be fair. One can feel that these medleys have evolved with the musicianship of these two artists, along with their will to reproduce the zest of their live performances and their shared love for collecting ancient material to give it a new life. Mission accomplished.

Released on CD and digitally on 28 April 2020; mastered by Sam Proctor; recorded and mixed by Myles Clarke at Grand Cru Studio, London