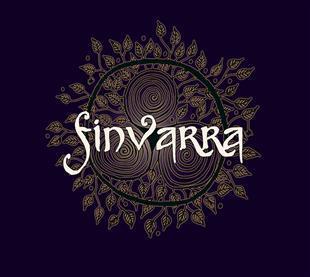 Enter the world of Finvarra - a dark, dreamy field of sound that at times feels like it has no beginning or end. A sound in search of a description - Oriental Celtic best fits the bill.

In this first self-titled album, Finvarra demonstrate that they bring a special element and approach to their love of Celtic music. They transform familiar tunes into new and exotic experiences. They interweave traditional music with ’progressive rock’ songs from the 1970s including the Battle of Evermore (Led Zeppelin) and Kelpie (Jethro Tull). Their music is a journey and the listener gets carried along with them on its wave.

’We are a small band of travelling musicians trying to fit into the modern world who keep on travelling and making music whenever and wherever they can.’ Finvarra first began to play together in Leiden, The Netherlands, two years ago and have been playing together ever since.

Dieke was ’a sultry jazz singer in smoky opium dens but now she adds her honey-like voice and tribal percussion beats to the Finvarra sound’. Gwendolen’s voice provides a harmonious counterpoint to Dieke’s, perhaps best captured on the mesmerising Battle of Evermore. She also plays Indian harmonium and Irish bouzouki. Patrick plays guitar with vigour and passion, as well as bouzouki and mandolin. Corne brings impressive driving fiddle to the band and also plays percussion. The result is a distinctive sound that commands attention.

Kelpie/Cliffs of Moher is a strong opening number which combines Jethro Tull’s song with a traditional Irish tune. Powerful guitar blended with Dieke’s sonorous voice immediately captures our attention. As with so many of Finvarra’s repertoire, this song has a chorus that’s easy to remember and join in.

The next song, The Wind that Shakes the Barley, is a familiar folk song with an Oriental melody. With driving dissonant guitar and a Middle Eastern flavour, Finvarra create a dark, mysterious version of this song that Loreena McKennit has also recorded recently. Dieke’s voice has a timbre slightly reminiscent of June Tabor.

Ciueleandra/Jovano Jovanke reinforces the echoes of Loreena McKennit with its dreamy Moorish opening with harmonium and yearning fiddle improvisation. As the speed accelerates, the guitar takes on a flamenco flavour. Patrick came up with this ’gypsy tune’ that Finvarra ’spiced up and combined with the melody of the traditional Macedonian folk song Jovano Jovanke’.

Dimna Juda has a completely different sound. Another Macedonian song, Dimna Juda is about an old crone who steals children and tears them apart; however the story of the song can also be taken as a metaphor for the passages of life. It is beautifully sung with resonant harmonies and percussion accompaniment. Listening conjures up pictures of traditional dancing in rugged mountains and verdant fields, and Finvarra’s version offers great potential for modern-day folk dancers.

The Well Below the Valley is another folk song sung beautifully, with an inviting chorus. It’s also a song about infanticide, which thematically follows well in the footsteps of Dimna Juda.

The album changes pace and style again with the next track, Only Our Rivers Run Free. This song about Northern Ireland’s constitutional status became an instant hit when Mickey MacConnell wrote it in 1973.

The more lyrical, wistful and reflective style persists with the opening of Drink down the Moon which then morphs into a lively Irish tune, Bonaparte Crossing the Rhine, played with vigour by fiddler Corne.

Flatworld is a tune by Andy Cutting which starts out as a peaceful melodic arrangement with guitar and flute duetting. The tempo gradually speeds up and the energy rises, with the arrival of percussion and violin, and the musicians give it ’the Finvarra treatment’.

A Poison Tree, an original tune by Patrick and Dieke, opens with a flamenco guitar styled introduction. The song sets William Blake’s poem to music.

The Battle of Evermore is possibly the best song on the album. Finvarra have revisited Led Zeppelin’s song and rebuilt it around a tune by Corne. Insistent guitar and atmospheric fiddle support a combination of deep, tempestuous vocals and a lighter refrain to tell the story which contains references to Tolkien’s Lord of the Rings.

The album finishes with Finvarra’s Oriental version of The Blacksmith, a traditional ballad first documented in 1909. The song is sung with passion by Gwen.

Finvarra’s first album is full of variety and surprises - in sources, styles, and textures. It stands up to repeated listening and grows on you further the more you hear it. A well-timed release, it’s perfect music for a summer festival, sitting in the sun and basking in their sound.

Recorded, mixed & produced by David Groeneveld
(except ’The Well Below the Valley’ which was recorded by Corné)

Mastering by Sander van der Heide at The Saint of Sound

1. Kelpie/Cliffs of Moher
2. The Wind that Shakes the Barley
3. Ciueleandra/Jovano Jovanke
4. Dimna Juda
5. The Well Below the Valley
6. Only Our Rivers Run Free
7. Drink Down the Moon/Bonaparte Crossing the Rhine
8. Flatworld
9. A Poison Tree
10. The Battle of Evermore
11. The Blacksmith