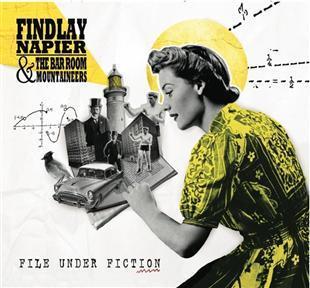 As soon as the opening chords of this album come crashing out of your speakers, you know that your ears are in for a treat.
Findlay and his band deliver a selection of songs about drinking and partying in a gutsy and sometimes earthy manner. Added to Findlay’s raw vocal style, are the fiddle and vocals of Gillian Frame and the keyboards and vocals of Douglas Miller. On this album the band is also joined by drummer Scott Mackay and bassist James Lindsay (Breabach).
Song titles like One for the Ditch and Raise a Glass leave you in no doubt that drinking is dear to their hearts, whilst Cut Me Off (about a restraining order) may not be a song to play to a maiden aunt.
The songs are full of energy, with the title track, File Under Fiction, providing a strong opening. It’s not all wild partying though - there are gentler moments, with Gillian taking the lead vocals on One for M,e and this brings the album to a quiet and romantic close after the wildness of the previous tracks.
A really exciting listen, and a band worth looking out for.

Released on 15 May 2011 on Watercolour Music Ltd