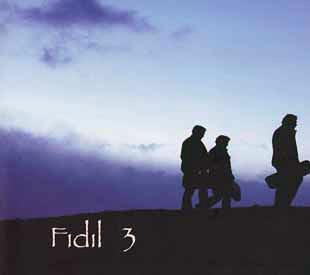 To be honest, I didn’t expect to find a whole CD of fiddle trios interesting (not that I have anything against the instrument but I do like a variety of texture). Indeed the a note in the accompanying booklet makes the point that the only instruments used in the recording were fiddles.

However , Ciaran O’Maonaigh, Aidan O’Donnell and Damien McGeehan, three young musicians from Donegal, who specialise in the music of their region, have produced an album with plenty of variety. Styles range from the toe-tapping opening track (“Hudi’s“) to the cadenza like “The Hunt of the Hound and the Hare.”

This latter piece is particularly interesting, as it paints a sound picture of a hunt, ending in more familiar folky territory with “Foxhunter’s Jig”

Fidil use many different textures in their music, for instance, the use of a drone effect, or two fiddles being bowed while one is played pizzicato. In some tune sets, the melody lines weave in and out of each other, or equally effectively, start in unison and then branch off into harmonies and contrapuntal playing, before coming back to unison. Percussive effects are included too, and they somehow sound as if there are more than three of them!

While many of the tunes originate from Donegal, some are Scottish, and Bellowhead fans will recognise “Kafoozalum” in one tune set, which apparently, has Gaelic roots.

The musicianship is faultless but I do wonder if the addition of something else, some discreet percussion perhaps, would have added more interest.

Released by FidilMusic on 1 November 2009.