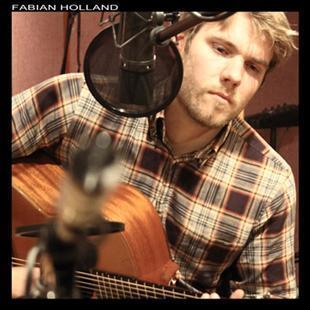 A new name on the folk scene, Fabian Holland is already making an impact with his laid-back, unfussy style. His sound is stripped down, usually just voice and guitar, although he also has guest musicians on some tracks, namely Tim Harries (Double Bass), Guy Fletcher (fiddle), Simon Care (melodeon) and Will Pound (harmonica).

The songs on this, his debut album, tell stories, usually with rather sad subjects. The Landlord’s Daughter could easily be a traditional song, with its tale of a father’s disapproval of his daughter’s choice of boyfriend. There are tragic consequences of course.

Home tells of a man who has moved to the big city to make his fortune, but daren’t go home to visit his sick mother because he feels he is a failure. Charlie chronicles a difficult childhood which turns into a difficult adulthood and Mad Eric’s problems with alcohol are made more poignant by Will Pound’s mournful harmonica.

While primarily a singer songwriter, Fabian does include two (rather unusual) traditional songs on the album:Dr Price tells of a disreputable character who uses some rather choice language to express how little he cares what others think of him, while Banks of the Dee, like many of his own compositions, deals with the theme of coping with hard times.

A promising debut from a fresh name.