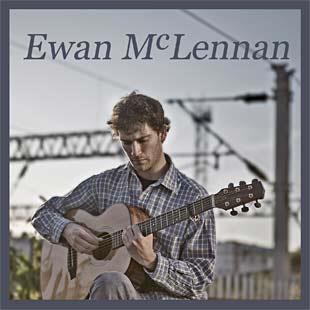 Though now based in Yorkshire, and a regular on the Leeds folk scene, there is no doubting Ewan Mclennan’s Scottish origins. It comes across in the lilt of his vocals and his choice of songs on this, his debut album.

The opening tracks are gentle, with a cover of the traditional ’As I Roved Out’, followed by the Jute Mill Song, The delivery is deft and delicate with Ewan’s lilting voice solely accompanied by his acoustic guitar. However, to this ear the songs are just a bit too bland to really grab. There is a slight change of pace with the instrumental ’Flowers of Edinburgh’, and the album then starts to get into more interesting territory with a cover of Ewan McColl’s ’Jamie Foyers’, the first of two songs specifically about Scottish involvement in the Spanish Civil War (the other being ’Jarama Valley’).

Then come two self-penned ’Another Morning’s Beggar’, and ’To The Hunting Go’. The former in particular, has a beautifully-delivered lyric and shows real song-writing ability. The second, an anti-hunting song, is the first of three unaccompanied tracks on the album, and the change of style works, adding a bit of variety to an album which can otherwise get a bit samey musically.

However, I do have doubts about whether Ewan’s voice is best-served by singing unaccompanied. It holds up perfectly well on a later cover of a second version of ’As I Roved Out’, but on ’To The Hunting Go’, it wobbles a bit, and while his cover of ’Old Man’s Song’ is fine, I can’t help feeling that one has to be better than damn good to record songs unaccompanied, as it inevitably does show up any flaws or weaknesses in a voice.

’I’m A Rover’ is probably my favourite of the traditional songs; for starters, it’s hard not to be won over by the singalong chorus…. ’I’m a rover, seldom sober’, and all round it is a joyous little song. Definitely one for an evening down the pub.

Overall, this is interesting mix. Lyrically, it’s a strong album, and it’s good to see someone doing some of the more political folk canon. Personally, though, I’d have liked a bit more variation in the music - and no, I’m not talking folk rock or a sudden battery of fiddles, clearly that isn’t Ewan’s style. However, as it stands the CD does just tend to wash over you.