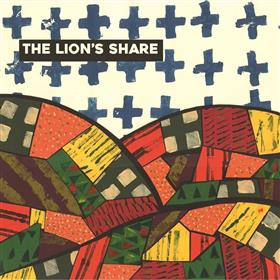 Tom Blackburn and Jimmy Grayburn are The Lion’s Share, a London-based folk duo which grew out of the UCLU Folk and World Music Society. With Grayburn on lead vocals and banjo and Blackburn on guitar and occasional fiddle, this EP is a well-balanced taster of their repertoire. Two original songs (written by Grayburn) and two well-known traditional folk songs sit side by side, showcasing their versatility.

The EP opens with the song which gives the duo their name. Based on Aesop’s fable about a lion and an ass joining forces, this song about greed and betrayal contains delicate guitar playing and pleasant harmonies.

Cathy is dedicated to Jeremy Sandford, and his television play Cathy Come Home. Its theme of homelessness is sadly timeless. The beautifully poignant banjo and guitar introduction prepares the way for the sad subject matter.

Hares on the Mountain is delivered in a laid-back manner while The Prickle Eye Bush’s jolly tune tells the story of a man about to be hanged; thankfully there is a happy ending.

It was a wise decision to put familiar songs alongside self-penned material. The pair prove on this CD that they are accomplished arrangers of both. A fine debut.