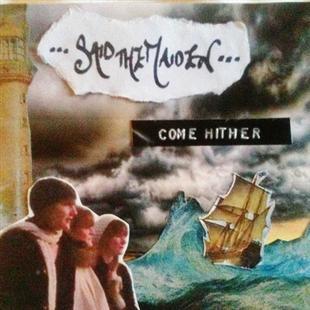 When you first encounter Said the Maiden, comparisons with Lady Maisery are inevitable - and the fact that one member of the band is called Hannah James could further add to the confusion (the other two members being Kathy Pilkinton and Jess Distill). However, the trio have their own approach to traditional folk music, as demonstrated in Come Hither, their debut EP.

Between them, Hannah, Kathy and Jess play a variety of instruments but it is their singing, with occasional instrumental embellishment, which is mainly showcased on the EP.

Specialising in traditional English folksong, the girls are adept at changing the texture of a song as it progress, so keeping the listener’s interest.

The opening track, Hunting the Hare, begins with fiddle, joined by the voices “diddling” the tune in unison, then in harmony, before launching into the lyrics. Once they are into the song itself, they follow this pattern but with the harmonies changing with each verse.

Spencer the Rover is sung in a similar style, but completely a capella. The Derby Ram has a nice touch in one verse where the girls take a line each, giving the effect of overheard snippets of gossip.

Instruments are heard again in Shady Grove, where a lovely scrunchy fiddle intro is joined by the guitar, and Rolling Sailor where some simple percussion helps drive the song along.