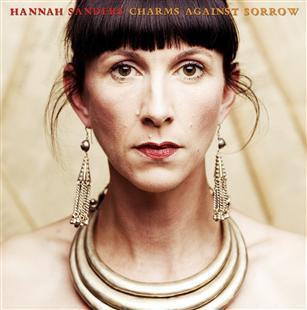 After two EPs, Hannah Sanders has released a full length album, Charms Against Sorrow. Her pure high voice lends itself well to the laid back style of the songs, reminiscent of Joni Mitchell, with the use of the dobro (played by Ben Savage) adding to the trans-Atlantic feel.

The songs are mainly traditional, many of them folk standards which will be heard frequently in folk clubs, and may even bring back memories of school days for some.

The opening track is a beautiful version of I’ll Weave My Love a Garland with the vocal sections being balanced by instrumental passages.

Joshuay, a version of the Gallows Pole/Prickle-Eye Bush has a much more upbeat tune, but still delivered in a gentle style. Backing vocals are provided by Jade Rhiannon.

While the accompanied songs are a delight, particularly striking half way through the album is a completely a cappella version of A Sailor’s Life.

Among the very familiar songs are Pleasant and Delightful and I Gave My Love a Cherry. The former usually heard as a rowdy singalong song which gets slower and slower, here it is sung with a vocal line that skips along and a lilting guitar accompaniment with harmonies by Hannah’s sister Ruth. The latter will bring back memories of singing lessons for many.

Bonnie Bunch of Roses and Mayflower Stranger are further examples of a well-known song, usually sung in a more up-beat version. The gentle delivery style and unobtrusive accompaniment makes the words, and therefore the story of the song very clear. This is also true of the dark murder ballad Miles Weatherhill and Sara Bell and the story of Lord Franklin.

Charms Against Sorrow is a joy to listen to.