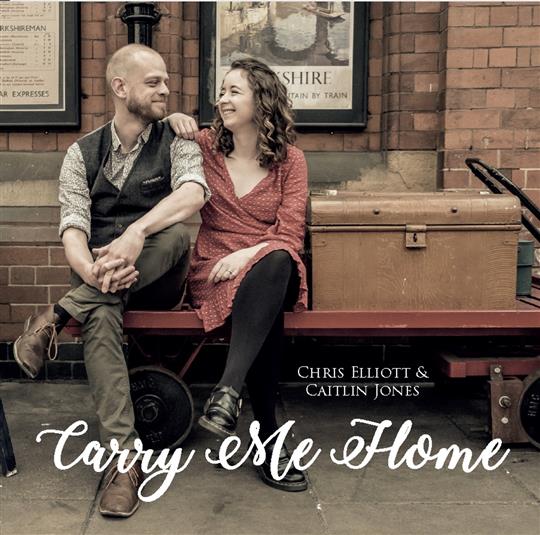 Chris Elliott (guitar, bouzouki, fiddle, vocals) and Caitlin Jones (whistles, harmonium, vocals) are two young musicians, singers and songwriters from Staffordshire; their debut album Carry Me Home is a collection of both self-penned and traditional songs ranging from the seventeenth century onwards, all deeply rooted in their home county’s heritage.

The joyful Staffordshire Men kicks off the album; this is a traditional ballad celebrating county’s industry, food and culture. Hidden Treasures tells the story of the man who discovered the largest Anglo-Saxon hoard ever found: this is the song in which Jones’ charming voice shines the most.

Their arrangement of Silver Dagger is delicate and suggestive: this song became famous thanks to Joan Baez, but it has its origins in the late seventeenth century. Brave Wolfe celebrates Major General James Wolfe, a hero of the war that made Canada a colony of the British crown. Here Elliott’s voice drives a tale of war and memory with a change of pace to a march rhythm after a softer start.

Kinver sandstone houses, located in southern Staffordshire close to the border with Worcestershire, are the core of Red Walls. These historical buildings were the main inspiration for J.R.R. Tolkien’s hobbit houses and the scene of centuries of local history, perfectly evoked by Elliott’s lyrics and Jones’ voice. The album closes with Middle of Nowhere, a set of whistle tunes characterised by a blend of baroque staccato and folk ornaments.

This is an intriguing release, not only for the pieces of history it describes, but because it also puts under the spotlight some human stories that allow us to see our world from another point of view. This is the true of Helping Hand, a song that Elliott wrote for his father, a railwayman that experienced the good and the bad faces of modernity and globalization.

The overall impression is timeless quality, with the stories, the natural and warm arrangements and the two voices entwining to take the listener to an area of diverse landscapes, history and traditions, a fifty-five minute patchwork of Staffordshire and beyond by two young but already experienced storytellers.

Released on CD on 1 August 2019. Recorded at Cellar Studios, Stourbridge