The Hut People - Cabinet of Curiosities 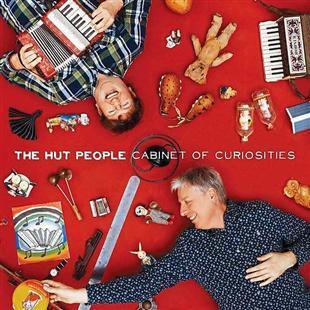 What do you get if you put together one of Britain’s best accordionists, a percussionist who has toured with The Beautiful South and Nina Simone, and a near-unending supply of interesting instruments for them to play?

The answer is Cabinet of Curiosities, the latest offering from English duo The Hut People.

The album contains fourteen tracks, inspired by music from all over the world. Sam Pirt’s virtuosic accordion sits above a set of infectious grooves created by Gary Hammond, using a mind-boggling array of unusual percussion instruments.

From the opening track, McCusker’s, the album really lays down its foot-tapping credentials. The catchy tune is backed by a complex groove, utilising various instruments, including the wonderfully named Zabumba.

This theme - a dance tune over an interesting groove - sustains the whole album, and the next track is no exception. Hammond’s astonishing versatility is demonstrated on Väsen, from Sweden, where he utilises six different instruments, including bottle tops and a waterphone.

One for Louise upholds the standard, and they even manage to maintain this quality when they drop the tempo for the beautiful Polska Efter Hins Lars, named for a Swedish fiddler. The huge variety provided by this album is cemented by Las Ramblas, a French folk tune that is somehow turned into a ska number by adding eleven assorted drums, tambourines and cowbells!

If there is a weakness, it is that sometimes it becomes a little too eclectic. Fife and Drum, a good example, contains extended periods of odd percussion sounds and not much else. The title track is better, but still falls short of recapturing the joys of earlier numbers.

The duo are back at their best on Jean’s Hut in the Bog, particularly the reel section, which is impossible to sit still during. Stor, the album’s slowest track, showcases the other extreme of their talents. The haunting accordion melody is accompanied by eerily simple percussion with immense natural reverb.

It could be suggested that the album isn’t offering anything new by the time we reach Karen’s Birthday Tune and Pitziak, but that seems unfair with tunes so good. A true gem then emerges in Latvian Tune, a superb
polka containing perhaps the most innovative percussion instrument: “Alan Jones’s coffee cup”.

The album ends with the typically excellent Song for Chris, and the brilliant Lucy Farr’s, which builds to a fine samba-like ending. They typify an album which is packed with joyous tunes and grooves which, despite a couple of exceptions, cannot fail to put a smile on your face.