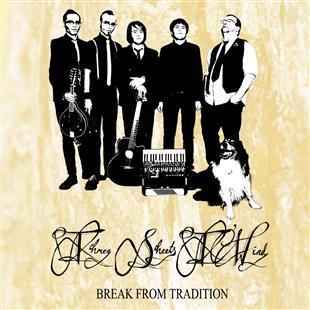 Imagine the Pogues with Yorkshire accents, with a sprinkling of ska, Cajun and a dash of country and western and you’ll have some idea of what Three Sheets T’Wind sound like. The band’s name is a fair indiciation that they have a penchant for drinking songs and their music has a raw energy, while the lyrics tell of life as it is.

Breaking With Tradition begins by assaulting your ears with I’m a-doing Fine, a bouncy number, with a Cajun feel. Other influences are evident in Dole Days, which tells of dulling the pain of unemployment with drink to a laid-back ska rhythm, reminiscent of the Clash.

The playing of the Last Post (on accordion) at the beginning of Johnny’s Army might make you think you are about to hear something gentler, but the song has as much energy as its predecessors, despite the poignant subject matter.

The EP does, however, end on a gentler note, with the country and western style Old Woolpack’s Yard.

If you like your folk punky, or your punk folky, Three Sheets T’Wind will be right up your street.