The Longest Johns - Bones in the Ocean 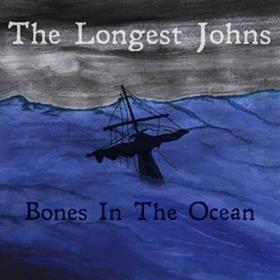 The Longest Johns are a new band who has kicked off their discography with their EP “Bones in the Ocean” which gives us five original jolly vocal sea shanties sung by the four members of this band. They are not even a year old as a group but are doing a good job of pushing their name out into the domain.

The songs are all sung in very carefully arranged harmonics, utilising the pleasant voices of the four men. Each shanty is a capella with no instrumental backup, using only voices to strike a chord with the listener.

There is a slightly different style for ’Retirement Song’ which has more of an American Western feeling but still with the jolly storyline of a retired sailor.

The stories are your typical shanty type, usually about the lives of sailors and their various adventures. Some of the songs have a gloomier message, in particular their title track ’Bones in the Ocean’ has the subject of death, as folk often does.

This is a great EP and defiantly leaves people wanting a little more and is doing a great job of drumming up excitement. I hope a full album will be released soon.

Self released by Matt Francis for ’Mif’ May 2013