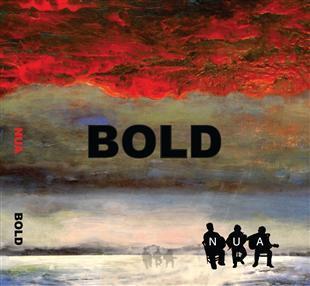 Canadian trio Nua draw heavily on Scottish and Irish influences, although most of their material is original. Combining the guitar of Graeme McGillivray, the fiddle of James Law and the bodhran of Jacob McCauley, they have produced a debut album of 14 exciting tunes.

As well as the traditional influences mentioned, one wonders if other styles of music flavour their work - the album begins with an Intro and ends with an Outro - an homage to the Bonzo Dog Doo-Dah Band perhaps? The opening of Intro sounds momentarily like Hawkwind in collaboration with the Penguin Café Orchestra before settling into the tune itself!

Fizzbuzz is a fairly standard tune plus rhythm section arrangement, but with the fiddle able to show the breadth of its range. The Draw begins to hint at the more diverse, syncopated rhythms which the trio are capable of. One impressive feature of this tune is the fiddle and bodhran playing the melody together, proving that the latter is not just a rhythm instrument.

There is more wonkyness in Happy Cammy Drammy Birthday where the listener is on edge, wondering if the melody and rhythm instruments are going to fall out of synch with each other, but of course, they never do.

Instrumental albums can often seem to be full of fast, loud tunes, but Nua can also be sensitive - Rich With Heart changes its dynamics and moves seamlessly between styles and time signatures. A very Irish sounding section moves naturally into jazz.

One would think that varying the texture would be difficult with just one melody and two rhythm instruments, but Nua make it seem easy. A fine debut.