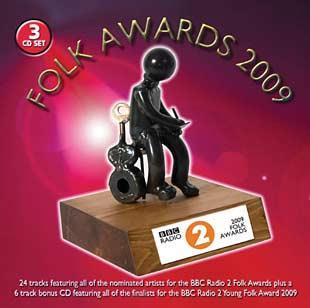 Compilation CDs are difficult to review. Don’t get me wrong, it’s not that there is anything wrong with the album, except perhaps a few odd track choices (Spiers and Boden and Faustus spring to mind). No, the problem is, it’s too good!

Here we have 3 CDs (oh yes) of nominees for the Folk Awards and Young Folk Awards. There is so much talent brimming in them, that it is hard to think of things to say beyond ’brilliant’, ’amazing’, ’wow’. But that doesn’t make a great review. I also want to avoid singling out the winners for particular praise. So, I decided I needed to break down this mammoth selection into some more manageable chunks. What better I thought, than to focus attention on the new up-and-coming artists that we hope to see more of here on Bright Young Folk.

Horizon Award
The Horizon Award recognises new talent that has broken through the folk scene. Previous winners include Spiers and Boden, Jim Moray and Karine Polwart. Both Jackie Oates and Bella Hardy were nominated for the award in 2008 as well.

Jackie Oates is a fine singer of traditional fair, with a sweet voice that suits slower ballads. She is also an excellent fiddle player, and former member of the Winterset. ’The Lark in the Morning’ somehow puts all these elements together into a slow, almost mournful and ethereal track.

Bella Hardy is another fantastic young female singer of trad songs. ’Alone, Jane?’ is, despite the title, a mostly upbeat track, with exciting syncopation, and a great combination of whistle, squeezebox and fiddle.

I had not previously heard of Jeana Leslie and Siobhan Miller, and I feel poorer for that. It is great to hear some good Scottish balladeering on their track ’Edward’. A lovely Scottish burr, and some great close harmonies, make for a catchy track.

The Shee were a revelation to me. ’Chilly Winds’ successfully manages to straddle the folk/indie/rock divide without becoming too removed from folk. Production techniques on the vocals, mix with woodwind and fiddle to create a truly genre-crossing sound.

The Horizon award nominees certainly promise great things for the future of folk, but even more so, the unsigned acts of the Young Folk Awards are an exciting indication of the directions folk may be heading.

Tyde fly the flag of fast and funky traditional tunes with their set ’Chairdance/The Gale/Skipping Over the Bog’. Fiddle, squeezebox and guitar come together to make a big, infectious, rhythmic sound.

Lucy Ward, in contrast, provides a solo unaccompanied vocal effort. Her Derbyshire accent adds bags of charm to a song of wife-beating and revenge. I’m sure I shouldn’t be smiling as I listen to it!

Megan and Joe Henwood take us to a different place again, with the appearance of a saxophone contrasting with the guitar and quite mournful vocal of Megan, singing of disappointment. An unusual combination, and a duo to watch.

Pipes and harp are not a combination that usually spring to the top of my list of favourite folk instrument combinations, but I think they will quickly rise up there thanks to Emily Hoile and Alice Burn. ’Boreal Owl/What it is/Trip to Brittany/Valley of the Moon’ is a great set of tunes that changes tempo and mood effortlessly.

Maz O’Connor takes us back to unaccompanied singing, her track ’The Cruel Mother’ depicting baby murder in a suitably mournful and expressive manner.

Finally, we reach the Jaywalkers, a group embracing the American influences of folk and blues. ’Run Sister Run’ has a great refrain, and confident vocals and instrumental handling.

So, that’s the new talent to be looking out for at a gig or festival near you! Of the rest, the more established acts, Jim Moray singing ’All You Pretty Girls’ is perhaps my highlight. But the quality on this album is a heartening display of the current state of folk. Long may it be so.