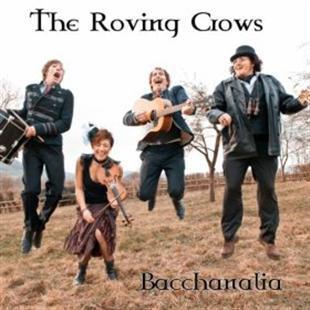 Think Irish Party band meets klezmer with a smattering of the Waterboys, a sprinkling of mariachi and a nod to Tijuana and you will have some idea of what the Roving Crows sound like.

Bacchanalia, as you might expect, is an album of songs about having fun, in various ways. The opening track Long Time Dead spells this out, exhorting us to make the most of life, and is followed by Love is the Finest Thing, adding a ska beat to the mix.

The tunes on the album are traditional, and arranged by fiddle player Caitlin Barrett. White Petticoat is a beautiful fiddle tune with minimal accompaniment. The arrangement is tastefully done and a sharp contrast to the exuberance that precedes it. The muted trumpet in the background is a particularly nice touch.

Things calm down for the middle few tracks of the album. Roll on Tomorrow features an infectious chorus (as do many of the songs) with some rich harmonies from the rest of the band. Time is much more contemplative in mood and a brief respite from the frivolity of the other tracks.

Caitlin has the chance to shine vocally on the moving song Brother which again features the sensitive trumpet playing of Greg Wilson-Copp. In Woman After My Own Heart he adds a Tijuana-style touch to the proceedings.

Then we are back to partying - President Garfield’s Night Out begins at a drunken lurch before morphing into a lively dance tune and is appropriately followed by Dirty Habits (not for the faint-hearted). It tells of a night of drunken exploits and an unwise piercing that resulted…..

The album ends as energetically as it began with Days in the Sun (a track with a klezmer flavour) and More Than One.

Paul O’Neill is responsible for the song lyrics and his declamatory vocal style fits well with the exuberance of the music, perfectly complemented by Caitlin’s versatile fiddle playing. Greg’s trumpet playing adds a Latin American flavour to the music, while Tim Tolhurst’s drumming helps to emphasise the vibrant nature of the music without over-powering it.

Songs you can sing along to, with tunes you can dance to - a winning combination.