Blackmore’s Night - All Our Yesterdays 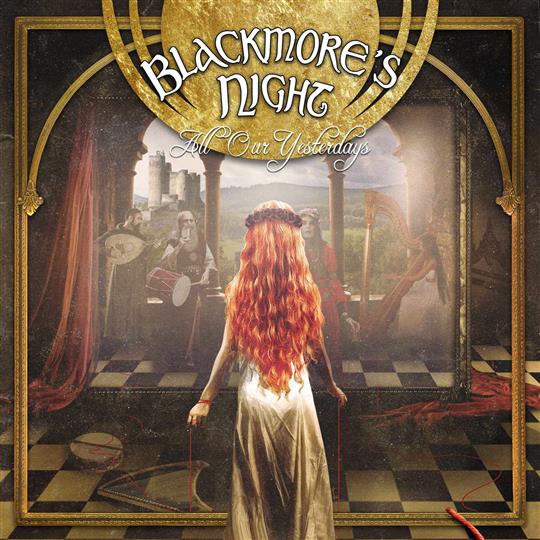 Ritchie Blackmore always has been and will remain an enigmatic figure. Challenging some may call it, or simply plain awkward and perverse, even back to his early days when his classical infusions into the rock idiom went against the grain.

From the high profile of ground-breaking hard rockers Deep Purple to leading his own band of ever evolving musicians in Rainbow and now the current partnership with Candice Night, he’s always courted some degree of mild controversy. From being the man in black to becoming mocked in some circles as the man in tights, many thought his flirtation with medieval and renaissance music and culture would never last but their musical and personal bond seems as strong as ever.

One look at the promo photos and he can’t quite escape the rock look, adorning his minstrel’s garb with the obligatory rock star shades and, although his band may bear names more at home in Sherwood than on an album cover, they press on contentedly in their own unique way. A philosophy which sees them following a musical path where they have always done things that allow them some creative freedom, in interviews the pair have referred to liking the fact that Ritchie can play anything and not be placed in a box (“I don’t like being in a box. I’ll be in a box later on in my life”).

Like Blackmore himself, the musical content of their latest album will divide people. Of the material, vocalist and multi-instrumentalist Candice Night has said, “There’s a theme to the chosen songs that focuses on the attitude of living in the present, and looking toward the future, because we are, indeed, enriched by our past. My main theme and inspiration has always been nature and folklore from around the world.”

The title track (and also the first single), All Our Yesterdays echoes the sounds of Candice’s Russian roots, while a new song written by Germany’s George Hesse comes in the form of an old-style, fiddle-driven instrumental with the Welsh title Allan Yn Y Fan (meaning Out There).

The album also includes a couple of interesting instrumentals: the acoustic guitar piece, Queen’s Lament and the dramatic The Darker Shade of Black spotlight the interaction between violin and guitar. The latter is a highlight of the record, atmospheric, stately and regal and a chance for Ritchie to dig out the electric guitar and deliver one of those solos with which he used to frequently decorate his rock tunes. Perhaps too, an indication of a not so distant future direction if his claims that he’s looking to make a return to playing some rock are to be believed.

The pair often turn to cover versions on their albums, and on this album add to the list the Linda Ronstadt hit Long Long Time; Mike Oldfield’s Moonlight Shadow and a maypole dance treatment of Sonny & Cher’s I Got You Babe. All gathered as a mid-album diversion, Ritchie & Candice doing Sonny & Cher might grate a little, although their take on the Oldfield number is authentic enough, and as they’ll reiterate, why stay in the box?

Elsewhere on the recording, Earth, Wind and Sky is a delicate ode to nature and adds to the strong folk-related theme which continues with The Other Side, a latter-day folk dance that joins two jigs that Candice sings: Coming Home and the supernatural-themed Will o’ the Wisp. In fact, Coming Home may well be more than the last song on the album; as with the album title, it could hint that Ritchie is interested in revisiting the rock direction. But for now, All Our Yesterdays delivers a true to form collection of work from Blackmore’s Night.

CD/DVD Deluxe edition includes the full album plus a DVD with music videos for "All Our Yesterdays” and “Will O’ The Wisp,” plus an extensive interview with Ritchie Blackmore and Candice Night on the making of the new album