Harp & A Monkey - All Life is Here 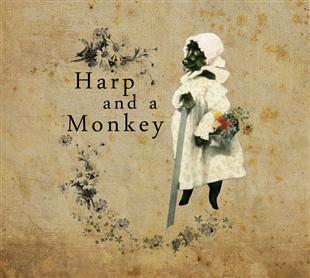 The “twinkly” band, Harp and a Monkey’s second album All Life is Here, is as full of quirky charm as their first. With an unlikely assortment of instruments (glockenspiel, accordion, harmonica, keyboards, harp, guitar, viola, banjo and melodica) mixed with electronic sound effects and field recordings, the North West trio have gathered together a collection of traditional and self-penned songs covering subjects as diverse as the first world war and old fashioned family picnics.

Walking in the Footsteps of Giants moves from the Kinder Trespass to the Spanish Civil War as many people were involved in both. It’s a song about having a strong sense of duty to fight for what is right.

There are a number of traditional tracks on the album, but they have been given the unique Harp and a Monkey treatment and brought up to date. The refrain from Bolton’s Yard gives the album its title and is a bit of an earworm, while Pay Day is a timeless tale of dying industries resulting in unemployment and poverty.

The Manchester Angel is the familiar tale of girl falling in love with soldier, accompanied by banjo and glockenspiel, a combination you don’t hear very often. Molecatcher is often sung with glee and gusto in folk clubs but Harp and a Monkey have given it a much darker feel.

Harp and a Monkey have a knack of turning the seemingly mundane into something deep and poignant - Tupperware and Tinfoil is a reminiscence about family picnics with “flasks of lukewarm tea” and will no doubt bring back memories for many people. However, the underlying message is one of love and solidarity and the song ends with line “With you by my side love, I know I’ll be just fine”.

Martin Purdy’s very touching Oh Daughter was written as a musical letter of hopes for his unborn child (who turned out to be a boy!). However, it still has a powerful message. The most moving song though is Gallipoli Oak, which tells the story of a man who takes an oak tree to Gallipoli in memory of his fallen son.

A musical patchwork and all life really is there!

Released on 24th March 2014 by MoonrakerUK