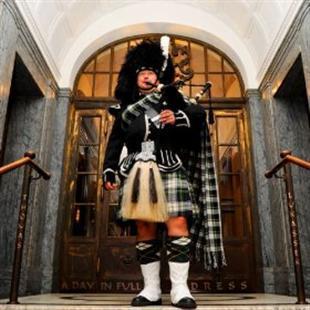 A German playing the highland pipes would seem rather unlikely, but that is exactly what you will hear on Thomas Lukassek’s A Day in Full Dress.

This recording will be for a niche market as the Highland pipes are not to everyone’s taste. However, do not fear, this is not an album of solo pipe music. Thomas also plays whistles and uillean pipes. Guitars, keyboards and percussion also contribute to the texture.

Thomas comes from a classical background and this CD contains mainly his arrangements of traditional tunes.

The instruments are used in different combinations throughout the album: the opening track, 8th, features whistles and pipes, Alisdair’s Reel adds keyboards, while Ghillie Callum has an interesting bass intro with piano providing accompaniment.

Donan Island has a haunting low whistle at the beginning, with gentle percussion. It also features a rich, trickling piano tune.

The title track is particularly interesting, being a duet between the pipes and low whistle. The tune borrows phrases from Amazing Grace, and is further developed by electric guitar in the central section before the pipes take over again.

Heavy rock-style guitar features in the tune Ardelve, with the guitar and pipes being in conversation. This is probably the most danceable tune on the album. Rocking the Seann Truibahs has a rather more funky feel.

Most of the tunes feature a repetitive percussion track as the foundation, but this does seem to dominate rather too much in some cases, almost obscuring the pipes or whistles. However, this may be an attempt to bring a much maligned instrument to a newer, younger audience.

A Day in Full Dress is an interesting attempt at presenting the pipes in a new an unusual way.