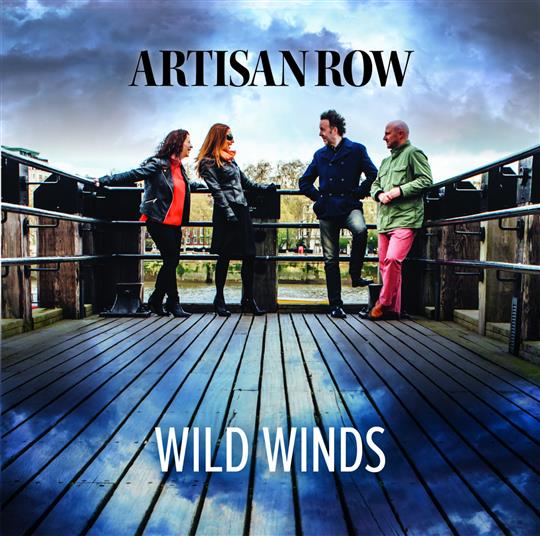 Artisan Row are a London-based band firmly influenced by their roots in traditional Irish music. Their first album, Wild Winds, is chock full of cracking music with songs, both original and traditional, tunes old and new and also a touch of Eastern Europe thrown in for good measure.

This is a generous album, not just in terms of its musical richness but also in the variety and diversity of its thirteen tracks. Band members Conor Doherty (guitar, vocals), Elma McElligott (sax, flute, low whistle), Peter Quinn (piano, keyboard) and Karen Ryan (banjo, mandola, fiddle, low whistle) have a fine folk pedigree with skills honed on the London traditional music scene, displaying faultless musicianship throughout every track.

They have an admirable musical versatility, as comfortable delivering a fast paced slip jig, as a gentle song of love. Breathtaking sets are sprinkled throughout the album. The Red Haired Lass / Charlie Harris is a joyful and vibrant track which showcases the tremendous musical dexterity of fiddle and flute playfully weaving around each other in these fine tunes.

Some of the best traditional songs seem to be about leaving home, and this is the case in the lovely Monk McClamont’s “Farewell to Articlave”. Mandola, low whistle and guitar work marvellously to complement Doherty’s fresh vocals. A song of reflection fitted to a sprightly and uplifting tune.

The fuller sounds and laid back texture of Helvic Jig demonstrate the band’s willingness to explore new settings for traditional music. Ryan’s tight banjo playing takes the lead in this smooth track with McElligott’s sax following suit supported by a small brass section. The result… a new and stylish musical fusion that works so well.

Originally recorded by Paul Brady, Mary and the Soldier is treated to a fresh interpretation bringing new vigour and energy to this classic. Upbeat and bold accompaniment and vocals drive this track forward and pleasantly sweep the listener along with it.

Macedonian Oro is an admirably complex fiddle tune performed on mandola, sax, electric guitar and piano. With unmistakable Eastern European sounds and rhythms written to accompany a traditional circle dance, the sound also has a contemporary feel, adding yet another welcome dimension to the album.

Wild Winds showcases an exciting and vibrant approach to delivering traditional music. A rich and diverse selection of tracks ranging from old songs, reels and jigs to new compositions, all in creative musical settings. Artisan Row have fashioned an album which delivers on so many levels.

Released on 8 September 2017 on LoLa Records.