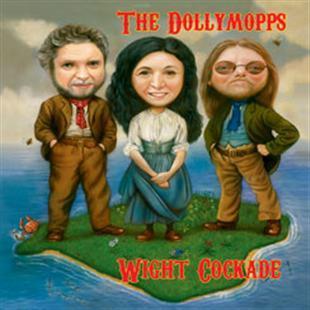 The Dollymopps - Virgil Philpott, Dorana Philpott and Justin Smith - a trio of harmony singers have been performing together for a number of years. Their second studio release Wight Cockade, sees the group continue to herald the beauty and exquisite nature of the folk tradition of the South of England.

Amongst their particular specialism - music from the Isle of Wight - we are treated to songs from early collectors such as Lucy Broadwood and Alfred Williams, making for singing and songs rich in heritage and thus undeniably important for the livelihood of the folk tradition.

The opening track showcases what the Dollymopps are all about. Fierce harmonies, strong, dynamic voices and flawless storytelling. Lost Lady Found - collected by Lucy Broadwood - introduces the group’s enthusiasm for seeking out rare material and arranging it to preserve it’s importance whilst keeping it fresh with interesting arrangements and occasional guitar accompaniment (such as in Jonas and the Devil).

Arrangements often include the setting of poems or discovered songs to tunes written by the Dollymopps themselves - for example in Newtown Randy. The mix of original composition and old gems makes for an album which is exciting and extremely relevant to the composition of the folk scene today.

The album’s fifteen tracks visit the original Isle of Wight Festival and amongst them cover homecoming songs, shanties and marches. However, special mention should be given to Wight Cockade’s unique selling point: songs taken from a singing tradition of the West Wight which continued up until the 1970s. The Dollymopps use of original songbooks from this particular tradition have served to introduce the listener to gorgeous, local music and lyrics.

The album also presents some songs with which the listener may perhaps be more familiar - such as British Man Of War. The tune itself however may not be quite so recognisable! This, along with many other songs were published in WH Long’s Dictionary of Isle of Wight Dialect - each of which have allowed us to delve a little deeper into a tradition which deserves to be kept alive and performed with such enthusiam and gusto as demonstrated by the Dollymopps.

Wight Cockade: fine musicianship, hearty singing and a chance to hear songs from the depth of a local tradition, something to be both celebrated and thoroughly enjoyed.