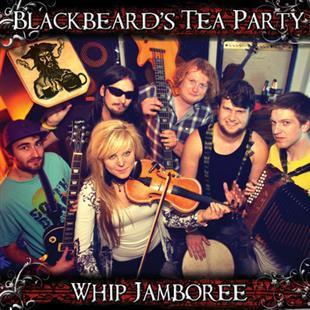 Blackbeard’s Tea Party has returned with their hotly awaited third album. The latest release Whip Jamboree reminds us of the talent that each member of this band has. The album does a fantastic job opening doors between the Folk world and other genres giving us a good merging of Folk, Rock and Techno.

This is the first of the band’s albums to be done in a full scale recording studio, and it has been recorded with a few alterations such as using a producer, not to mention a change in lead vocalist and melodeon player. Even with these adjustments the band keeps it’s highly unique sound and defiantly keeps to their style of funky dance tunes.

What is important is that although the style is familiar, it is not repetitive or tired. Whip Jamboree presents us with a whole new cast of tunes that stand alone as well as making a great album and complementing the band’s previous musical output.

The tune Landlady gives us an hilarious anecdote which is reminiscent of traditional folk comedy such as Jake Thackery, but adapted for Blackbeard’s Tea Party’s more saucy tastes.

The first tune The Valiant Turpin and The New Jigs really show us how you can merge older folk ideas and dress them up to reach a wider audience, really bridging a gap in our modern time and helping to secure even more youth to Folk. That is not to say of course that they cannot be enjoyed by all!

The album is not simply super-fast ceilidh tunes either, although we get a fine example of these with Whistable Cottage/ Superfly and The Devil’s Kitchen, there are also prime examples of rockier songs but with an original folk rooting such as Polka Against the Clock.

The title song Whip Jamboree, also the album finale, gives us an excellent finish which nicely mixes everything that the band wants into one booming track, leaving us feeling like we want more.

A very enjoyable album which is hopefully a mere hint of things to come.