The Gentle Good - While You Slept I Went Out Walking 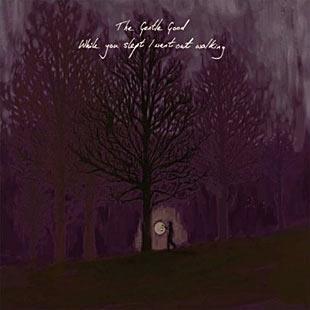 It took a little while for me to get into The Gentle Good’s album ’While You Slept I Went Out Walking’. There are at least two reasons for that.

Firstly, the album is a neat mixture of English and Welsh language tracks, so I was clueless on the subject matter of half the songs. Secondly, gentle voice and guitar combinations always lull me into a very relaxed state, which is not the best when trying to pay attention for a review. Luckily I overcame both these obstacles, thanks in part to an acquaintance who gave me information on the Welsh-language tracks. Although, I must urge The Gentle Good, and every band, to provide at least sketchy sleeve notes for us poor reviewers.

Fully equipped, I listened again, to what I discovered to be an enchanting album. The guitar and voice remind me in turns of Jose Gonzales and Kris Drever, meditative, sometimes mournful. There are no big numbers here, but instead a constant flow of slightly ethereal goodness.

For me, tracks three and four are the highlights. ’Waiting for Jane’ has a simple, slightly sing-songy verse, that leads into a more reflective refrain. It often succeeds in latching itself into my thoughts. ’Titrwm Tatrwm’ I am told translates as Pitter Patter and sees a stormy night reminding the singer of his love on Anglesey. I don’t understand the lyrics, but their lyricism draws me in, and the greater level of instrumentation than on many tracks punctuates the song well.

’While You Slept I Went Out Walking’ is not, for me, an album to listen to intently but rather something to use as an underscore. There are no poor tracks, but equally no belters and that is not what this album is about. If you want to listen to some gentle folk it is a good buy.

Equally, if you want to hear some lovely Welsh intonations you could do much worse - I certainly enjoyed that aspect. But don’t expect to be doing anything more energetic than having a cup of tea listening to this amiable album.